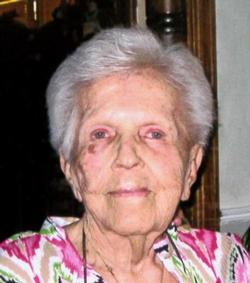 Resided in Tulsa and active in East Tulsa Christian Church

She met Scotty through a co- worker, his sister June. They married in 1946 during a visit to Carlsbad Caverns and were married inside the caverns.

They raised their family in Tulsa until they moved to Tenkiller in 1973. They loved to invite visitors and family to their house. They would host fish fries to the community and use their large garage as a dining room. They were active in the Gore United Methodist Church for many years.

They had ski boats and we would spend the day on the lake skiing and swimming. There was a community dock and dad would put a watermelon in a gunny sack, tie it with a rope, and drop it to the bottom of the lake. After the day of skiing we would pull it up and have ice cold watermelon.

Mom would participate in all the activities in her own quiet way. Dad was the entertainer and mom would always be there helping but in the background due to dad's gregarious side.

Later they had a pontoon and we would spend the whole day on the lake tied up to friend's and family's boats just hanging in the water.

From Brenda and Erwin: I remember when we were in elementary school, mom would sit down with us every Valentine's day and would read every card that we would get from school mates.

She would also lay down with us at night when we went to bed and visit with each one of us. We would talk about the day and things that had happened to us.

During a party at the lake on New Year's Eve, dad flicked the lights at 12:15, signaling everyone it was time to go home. Mom was NOT happy and it never happened again.

After dad died, we had caregivers at the house full time. They were wonderful and always showed up for work and loved mom. They were heartbroken when we moved mom to Tulsa.

When she was moved to the Frankly Home, it was a blessing. Robbin and Kenneth were wonderful in their care to mom. She would not have maintained as well as she did if it had not been for their wonderful care. They became family to her and her family. The other caregivers, Gail, Rose and Pam were just as important and they all loved her dearly.

(Brenda and Erwin) We have been so blessed to have been raised in such a Christian family and the wonderful upbringing we had. They both were such great role models and taught us how to live a full and inspiring life, respecting others.

Her passing is heartbreaking but we are so excited to know that she is with her Lord and dad. We know they are having a great time together in their new home and on their heavenly lake.