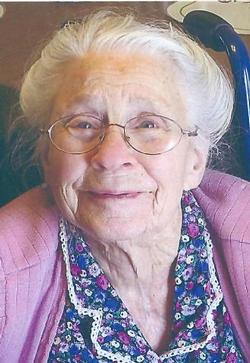 Ila Mae Eckenrode was born Aug. 18, 1916 in Pawnee County, OK to Clark Garner and Fannie Miller Garner. In 1918 the family moved by covered wagon to Texas County and in 1921 to Spearman, TX. Then in 1927 to near Las Animas, CO where Ila heard and embraced the gospel at 17 years of age. In 1933, she embraced the truth and way of God and that has been the whole focus of her life from that time. She did house work in homes until 1944 when she began teaching in rural schools on "war emergency certificate" and then attending college summers receiving her degree in teaching from Colorado State Teaching College at Alamoza Colorado College in 1957. She continued teaching in Colorado & Southeast Kansas, until 1959, then was a house mother for the Institute of Logopedies in Wichita, KS, until she married James Paugh in Sept. 1961. James died in Aug. 1974 and Ila returned to CO in 1980 to help care for her mother. She married Paul Eckenrode in April 1986 and he died in Jan. 1990. She remained in her home in Las Animas, CO until moving to OKC in July 2010 to Baptist Village to be near her sister Ruth Roush. They have shared a home in Piedmont, OK since July 2011, where she passed away May 26, 2014. She is survived by two sisters, Ruth Roush of Piedmont, OK, and Alice Martin of Lakeview, CO; many nieces & nephews and a host of friends. She was preceded in death by her parents; both husbands; 5 brothers and 1 sister; a step-son; and 2 step daughters. Visitation will be Thursday, May 29, 2014 from 9AM to Noon at Buchanan Funeral Service with services to celebrate her life at 2PM with reception following. Additional service will be at 1PM, Friday, May 30, 2014 at Lakeview Gardens Cemetery Chapel in Wichita, KS.