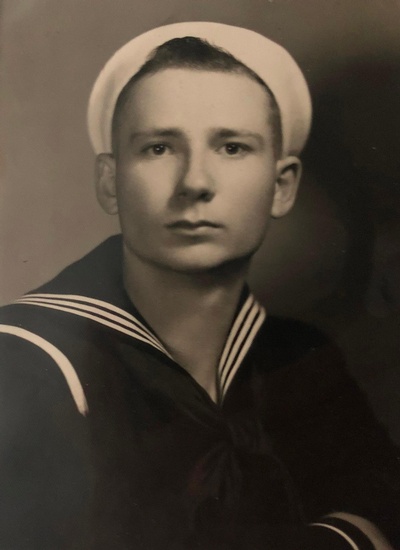 OKLAHOMA CITY Ivan Stewart, age 96 1/2, to the day, passed away April 24, 2019.  He was born to Lester Robert and Emma Mary Stewart in Gainesville, TX.  He graduated from Shawnee OK High School in 1940.  He joined the Navy Nov 6, 1940, and was a Survivor of Pearl Harbor, Dec 7, 1941.  He was knocked down from the first bomb dropped on Ford Island.  He was strafed and pulled men off the burning and exploding Battleships.  He proudly served his country for six plus years during WWII with Carrier Aircraft in the South Pacific.  He attained the rank of Chief Petty Officer Oct 1943. At age 21, he was reported to be the youngest ever Chief Petty Officer.

He married Pauline Copher of Shawnee, Oklahoma, in Santa Ana, CA, Nov 21, 1944.  He was grateful to Polly for bringing him to the Lord.  Shortly thereafter, he decided to give up his goal of a career in the U.S. Navy to serve the Lord as Minister in the Church of Christ.  To this union was born Sharon Rae, Michael Ivan and Rebecca Sue.

He received his BA degree in Bible and New Testament Languages in 1950, his Masters Degree in 1960 and his Doctors Degree in 2012.  Along the way, he was certified to be a School Teacher, School Counselor, and to do Psychometrical Testing and Therapy.  His studies were helpful and applied to his ministry and being an author.  He wrote many books including  FROM HOUSE TO HOUSE, GO YE MEANS GO ME, OPEN BIBLE STUDIES (OBS), PROSPECTING FOR SOULS AND 1st and 21st Century Shepherds and Shepherding, which he finished at age 93.  He continued writing until his death.  Thousands of copies of Ivan’s writings have been used all over the world since 1955.  He led CAMPAIGNS FOR CHRIST with up to 100 workers, around the world for many years and founded the SCHOOL OF PRACTICAL EVANGELISM.  The process of Ivan’s methods were those of Jesus which was a multiplication factor.  Multitudes have been and are still being brought to Christ.  Ivan often said, “I am grateful to God for the opportunities given me to work in His Vineyard.”  He always added, “May God receive all the glory!”

Polly died in July 2009.  He married MaryFern White in Oct 2009.  She was a preacher’s wife whose husband died 14 years earlier.  Ivan often said, “I am thankful God gave me two beautiful helpmates to help in my ministry.”

He was preceded in death by his parents, one brother, Arthur Stewart, one sister his sister Sylvia Sue Griffey, his daughter, Sharon Rae, who was killed in a car/train accident at age 18 with five others from Oklahoma Christian University, and his wife of 65 years, Polly Stewart.  He is survived by his wife, MaryFern Stewart; his son, Michael Ivan Stewart, of Austin, TX; his daughter, Becky Sue and husband Gregg Standridge of Norman, OK; son, Kevin White and wife Christine, Edmond, OK; daughter, Karla and husband Eldon Pummel of Woodward, OK; sister, Virginia Willis; 11 Grandchildren; 5 Great Grandchildren and a host of nieces and nephews and Christian friends from around the world.