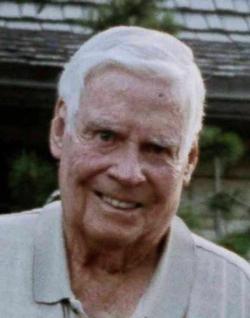 Jim was born in OKC to Goldie (Shurtz) and Noble W. Harding. He graduated from Central High in 1955 and immediately started his printing career with the 1st National Bank, where he met his wife of 58 years. He entered the Army in 1959, spending most of his 2 years stationed in Dachau, Germany. After his discharge, he returned to work at the bank. An opportunity came up to buy an auto supply business which he kept a short time production manager. In 1970, Jim began his sales career with Treck Photographic selling printing supplies and equipment to commercial printers. In 1975, an opportunity to help establish Lawrence Photo in Oklahoma began as a great opportunity to expand his sales career which he became sales manager. Around 1980, he helped establish Western Paper as a dominant Graphic Supplier, which later became XPEDX. Jim was selected to the President's club 5 times for outstanding sales achievement. Jim had been a member of The Golf Club at Surrey Hills for over 30 years, where he enjoyed playing golf & cards with his friends. He is preceded in death by his parents; 2 brothers, Fred & Charles Harding. Jim is survived by his wife Barbara; 2 daughters, Lori & husband David Kann of OKC, Juli and husband Joe Marino of Moore; granddaughters, Miranda Kann & Gianna Marino, who were the joy of his life; nephews, Mark, Scott & Robert Harding; sister-in-law, Jackie Harding; & 2 nieces. Visitation will be from 10am- 8pm Friday with family receiving visitors from 2-4 pm. Services to celebrate his life will be 11:00am, Saturday, December 19, 2015 at Buchanan Funeral Service in the Chapel with burial to follow at Memorial Park Cemetery.