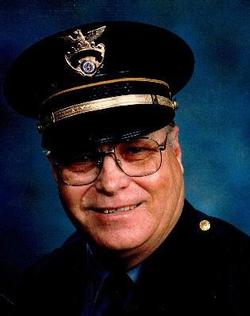 Thomas,
James H."Curley", passed away on August 2, 2010. He was born on April 24, 1931 on a farm, three miles southwest of Quinton, OK, and was the son of Claude C. and Willie Lou Thomas. He attended Quinton Schools and graduated in 1951 and was selected the outstanding student of that year. He lettered three years on the high school football team. In June of 1951 he joined the Air Force and served 12 months in Korea from Aug 1952 to Aug 1953. After Korea he was assigned to Holloman AFB, NM, where he met and married Janet Dunigan. He reenlisted in the Air Force in 1955 and was assigned to Ardmore Air Force Base in OK. And then was assigned to the Air Ground Operation School, Keesler AFB, MS. In Nov. 1960 he was assigned to Military Army Advisory Group in Vietnam and served 14 months there. In March of 1961, he was assigned to the 694th Radar Squadron, Lewistown, MT, serving there until Nov. 1965. He then received orders for Armish MAAG, Iran. In Nov. 1967 he was assigned to Hq Norad, Colorado Springs, CO. He retired from the AF in 1971 with the rank of Technical Sergeant after 20 years of service. He received the Joint Services Commendation Medal upon retirement. He came home to OKC in 1972 and was hired by the OKC Air Port Police and went to the Police Academy in 1972. In 1978 he transferred to the OKC Police Dept retiring with 20 yrs. of service in 1992. James was a member of Lodge 123, Fraternal Order of Police of OKC and pf, Retired Police Officers Association and also pf, Post 12, American Legion Bethany. After his retirement he played guitar with the Warr Acres Senior citizens Band, playing ole time country music and played with a band called the Tune Twisters in nursing homes and retirement centers. He was preceded in death by his parents; wife, Janet (1989); brothers, Alvin C. , Carl W. , and Charles Ray Thomas; sisters, Maggie and Juanita. He is survived by his brother Willie Robert Wayne Thomas; son Jeffrey S. Thomas; daughter Linda M. Collins; grandchildren, James E. Thomas, Jantina Carr. Visitation will be Thursday and Friday 8:30 AM to 8:30 PM. Services will be 2:00 PM, Saturday, August 7, 2010 at Bethany Church of Christ with burial to follow at Bethany Cemetery.