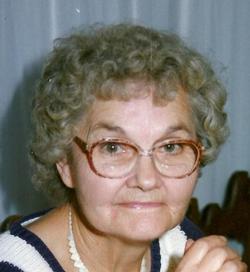 After a long illness, Delberta Brainard went to be with her Lord on Tuesday, September 12, 2012. Delberta, known in her younger days as "Bert" was born in Hornersville, MO on January 12, 1923 to Franklin and Nellie Moore. She was the second offour girls born to sharecroppers in the Missouri bootheel. She met and married Lee Brainard, her husband of 40 years. They wed during WWII and shortly after she went to live with his family in Enid, OK when he was relocated to England. They were reunited on her birthday three years later when he returned from the war.

They established their family home on a farm northwest of Parsons, KS. There, three of four children were born, Connie, Carol and David. Dana was born after the family moved to "the City." Delberta was the picture of an industrious homemaker. She was a multi-tasker before the word was coined. Cooking, sewing, gardening, canning and raising four children along with volunteering for various church responsibilities kept her busy. Yet, she always had time to share a meal, an iris rizome, or her time with a friend or neighbor.

She will also be missed by her grandchildren and great grandchildren. Going to Grandma's house, playing games at the kitchen table, eating strawberries from the garden, picking up pecans in the pasture were some of the things that made special lifelong memories.