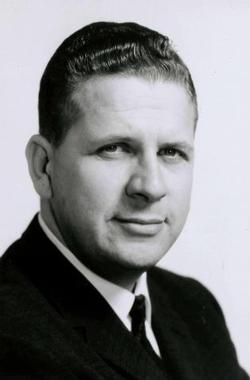 Jim went to be with his heavenly father on Saturday. He was born to Ethelyn (Bradley) & Herman Mills in Weatherford, OK. Jim attended Southwestern Oklahoma State University as well as spent time in the Army as a Cryptographer during the Occupation of Japan, and 31 years as the operations manager for Carpenter Paper. He proudly served as an Elder for 15 years at Northwest Church of Christ. He was preceded in death by his parents; 3 brothers, Herman Eugene, Willard Leon, and Donald Wayne. Jim is survived by his wife of 66 years, Norma; sons, Mark and wife Mona, Mike and wife Jeri; grandchildren, Jennifer and husband Cody Bounds, Steven, Meredith and husband Todd Regas, Jordan and husband Dalton Coates, and Lauren; great-grandchildren, Micah, Eden and Jasmyn as well as many other family and friends. In lieu of flowers, please send donations to Benevolence @ Northwest Church of Christ. Services to celebrate his life will be at 10:00 am, Wednesday, March 30, 2016 at Buchanan Funeral Service Chapel with interment to follow at Bethany Cemetery.