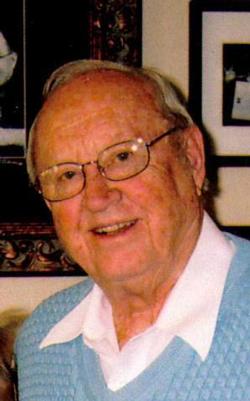 J. C. was born in Perkins, OK to Ovie Dewey and Hazel (Snead) Williamson. His parent's and a brother Leon Williamson preceded him in death. He is survived by the greatest love of his life, Dena Blake Williamson, and they were married on July 4, 1953 after only three months of courtship. Theirs was a marriage for the ages – infused with friendship, romance, unwavering commitment, and a fierce loyalty based on a very strong Christian foundation. JC and Dena were best friends, closest confidantes, and each other's shelter as they navigated through life's storms and triumphs. They moved through life as one, providing a remarkable example of unselfish love to everyone around them.

Together, they raised three children he is also

survived by. A biological son, Rick Williamson, and two adopted daughters, Robin Williamson Jones, and Shelly Williamson. He loved and adored each of them equally, completely and unconditionally, selflessly giving them everything they needed in life, especially his ethics, wisdom, and strong sense of integrity. For Robin and Shelly, he did not biologically give the gift of life, but in our hearts we know his love was deep and real, as if he did. For God to have chosen dad as our father was a dream come true and a gift we will never be able to repay.

They say that blood is thicker then water, but we know this isn't true, because we couldn't have asked for a better father then the one God gifted us with you!

JC leaves a rich legacy for his family and to all who knew him. He is also survived by Rick's wife, Sally and their children: Kerri and husband Todd, Jessica and husband Travis, Abby and husband Riley, and Hannah husband Frank. Robin's husband Scott and their three children Kameron, Trey, and Cassidy and eight great- grandchildren, all of which he absolutely adored!

Although JC was a man who became instantly friends with virtually everyone he met, he had a very special bond with many of the officers at the Bethany Police Department and considered many of them his "adopted" sons as well. After his retirement, he continued to eat breakfast with them every morning at the Old Orchard Restaurant in Bethany. Even walking to the restaurant after he could no longer drive! A gentle man yes, but their was a the Williamson stubborn side too.

After serving our country as an Atomic Veteran In the United States Air Force he worked for many years as a food broker in the grocery industry. His work ethics and integrity carried through here as well and he was so respected by grocery store owners all over Oklahoma that deals were made on a handshake. No contracts needed, his word was that trusted, and he always followed through.

JC's retirement lasted about two weeks and he decided it was time to get back to work. It was at this time, with the love, support and encouragement from his wife Dena, that he opened his own produce brokerage business, Profits Unlimited. Of course, this business was a huge success and several years ago he turned the helm over to his son Rick. Rick continues to grow the business with the same commitment, ethics, and integrity that he learned from his dad!

One of JC's greatest pastimes was the love of the softball and the basketball game. He never missed a basketball game of Rick's or a softball game of Robin or Shelly. Many times as Robin and Shelly would be playing on two separate fields, he would stand between the two watching both games at the same time. If he were working out of town, he would drive back for the game and then back to where he was working, at times clocking twelve hours or more of driving time, just to make the game. By the time Shelly advance in to college softball at UCO, one would be hard presses to find a referee that didn't know who JC Williamson was! He had no problem lining them out on a bad call! One of the proudest moments of his life was watching her play at the Softball Hall of Fame! The only thing he loved more then the game was his little girl who played it.

It was the simple things around him in life that dad never took for granted. He was absolutely devoted to his wife, children, grand children, and great-grandchildren. He was a father who always involved himself in every detail of his children's lives and supported, respected and loved his wife unconditionally putting her first, even in his final hours. He was a man of strong Christian faith, believing in the power and strength of Jesus Christ's love and the beauty and peace that would be waiting for him after his passing.