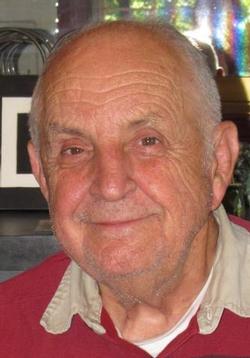 Jack was born November 4, 1928 to Alois Carl and Martha Margaret (Shields) Rieger, charter members of St. Francis of Assisi Catholic Church. He died Friday August 16th after a long battle with Alzheimer's. He grew up in the Catholic neighborhood surrounding St. Francis and the residence of Bishop Meerschaert, graduating from Rosary Grade School. He attended St. Gregory's H.S. in Shawnee, OK, at that time a boy's boarding school, where he graduated as valedictorian in 1946. While a student there, many life long friendships were formed.

He earned his BA from Oklahoma City University and his MA from Oklahoma University. He retired from FAA in 1979 as a systems analyst. Afterwards, he returned to his passion of teaching college mathematics. He was instrumental in creating the computer programming department at Oklahoma City Community College. He also retired from Rose State College as a mathematics instructor. He became a certified clockmaker following his tenure at FAA, known by many as "The Clock Man." He was a lifetime member of the St. Gregory Alumni Association and served as president during the 1970s.

In 1952 he married Patsy Irene Mobbs and from this union, three children were born. He is survived by his wife, their son John Patrick and wife, Deborah Kay (Bowman) and their children Taylor Nicole and Sean Patrick; daughter Jane Anne and husband, Kevin Mahoney; son Carl Joseph and wife, Kathleen Marie (McGrath) and their children, Todd Alan, Anne Marie and Jacob Alois; his sister, Margaret Ellen DeBee. He was preceded in death by his parents; his oldest brother, Aloysius Carl who was killed in WWII; his sister, Anna Kathrine Carter; and his youngest brother, Vincent Paul.

A special thanks to Betty and Terry Singleton and family, who were always available for love and assistance; caregiver Dorothy Taylor; his physician, Nathan Valentine, MD, and all of our friends, family, priests and acquaintances whose kindness to our Jack added to his happiness.