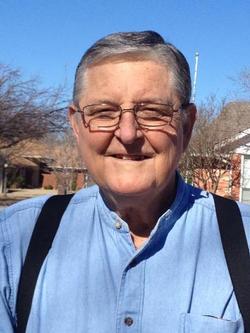 John Raymond Williams, age 68, of Yukon passed away August 23, 2015 at the Integris Hospice House after a courageous battle with cancer. John was born on March 7, 1947 in Harlingen, TX to John and Gladys (Shorter) Williams. He is survived by his wife, Brenda (Finch) Williams; daughter, Stacy and Donald Schmidt of Rogers, AR; two grandchildren Aurick and Alivia; two sisters; two sets of brother and sister in laws; many nieces and nephews and more friends than one could even count. He was preceded in death by his father and mother and one sister. He was a devoted, faithful, and loving husband, father, grandpa, and friend. The memorial service and celebration of John's life will be Tuesday, September 1, 2015 at 2 p.m. at Buchanan Funeral Service Chapel. In lieu of flowers, please consider making a donation to Integris Hospice House, 13920 Quailbrook Dr. OKC, OK 73134.