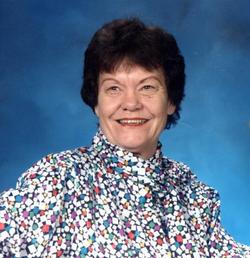 Joy Norris was born on March 13, 1928, in Grant, Oklahoma to Lucille and Jack Norris. She was the 3rd of 6 children in the Norris family. Joy attended school at Grant Elementary and was a 1946 graduate of Goodland High School where she played basketball and enjoyed roller skating.
After High School, Joy attended SE Oklahoma State College in Durant and graduated with a BS in Math. Deciding that she wanted to teach, she then attended Oklahoma State University for a year and obtained her teaching certificate.
With teaching certificate in hand, Joy took a position in Jenks High School teaching math. She also coached basketball during her years at Jenks.
While in Jenks, she met her future husband, Henry Parker. Henry swept her off her feet, literally. After the wedding ceremony, still decked out in her wedding dress, Henry wheeled her down Main Street in a wheel barrel as the onlookers cheered.
The couple became a family in 1955 when a daughter, Teresa, was born. Their joy was short lived, however, when Teresa was diagnosed with cancer and died in 1959. A year later, they were blessed with Kelly, a healthy baby boy.

Joy worked most of her life and was a strong woman in man's world. She worked side by side with Henry running Parker Brick and Wrecking Company. When that company closed, she opened her own business, running crews and heavy equipment in the oil fields through the oil boom of the late 1970's and 80's.
After retiring from the heavy equipment and dirt moving business, she returned to her teaching roots and re-entered the academic arena. For many years, she did private tutoring, taught English as a 2nd language, and filled in as a substitute teacher at the secondary level. Upon her "2nd Retirement", she began working at Dillards at Penn Square in Oklahoma City, where she accumulated a vast wardrobe and used her sales skills.

After patiently waiting , and waiting and waiting, she finally became a Grandmother in September of 1999. Joy was a devoted "Grams", channeling energy into her two grandsons whom she loved dearly. She cheered the soccer team, clapped for the play performances and taught them both how to play tennis. She also enjoyed traveling as a family and took multiple trips spanning South Carolina to Arizona with lots of trips in between.
The Lord took Joy home during her sleep on Friday, October 4th. She was ready for this life to end and her new life with Jesus to begin. Joy was preceded in death by her daughter Teresa, sisters Ann McMurry and Ray Jean Streetman and brothers Jackie and Joe Pate Norris. She is survived by her son, Kelly and wife Dana, grandsons Gabriel and Ian and sister Judy Moffitt along with numerous nieces and nephews.