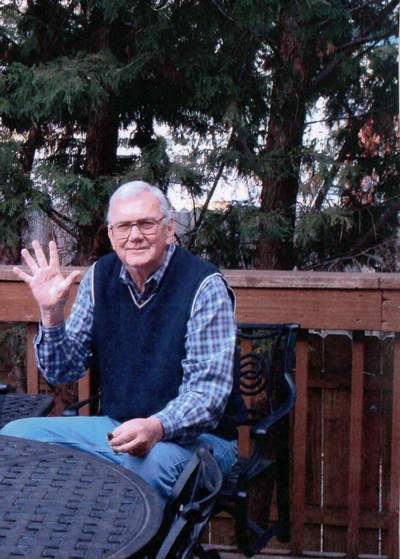 Len Erikson passed away on Saturday, April 27, 2019 surrounded by family.  Len was born to Erik Erikson and Ebba Nyholm on June 11, 1931 in Chicago; his parents were Swedish Immigrants.  He attended Chicago schools and was the Captain of the Swim team while in High School.  Len graduated from Beloit College in 1954 with a BS in Chemistry and Geology.  Following Officer Candidate School (OCS), Len went to Naval Graduate School in Monterey, CA where he graduated a Meteorologist and was stationed at the Navy Fleet Weather Center in Coronado, CA.   Following his Navy service, Len and his family returned to Chicago where he joined the Central Purchasing Department of Container Company.  In 1962, Len joined American Potash and Chemical as a salesman in its Chicago office.   The family moved to the East Coast in 1967 where Len was a Regional Manager headquartered in New York City.

In 1972, the family moved to Oklahoma City where Len held several sales assignments until he became the Vice President of Marketing and Sales for one of the Kerr McGee Chemical Divisions.  Len retired in 1991 to do volunteer work.  In 1994, he joined the Ground Water Protection Council (GWPC) as a part time fund raiser where he enjoyed the fellowship of his younger associates.

Len is survived by his beloved wife Connie of almost 65 years, his brother Don Erikson and his wife Carolyn Erikson and Marilyn Glynn, his sister in law.  He was a father to Steve Erikson and daughter in law Sharon Erikson of Blue Springs, MO, Dr. Laura Erikson and her life partner Tom Otto of Greenbrier, AR, Karen Jefferson and son in law Dr. John Jefferson of Lowell, AR and Amy Tener of Arlington, VA.  Grandfather of Anna Lyse Erikson, Meredith Schuberth and husband James Schuberth, Kirsten Erikson and fiancé Jason Peete, Ro Jefferson, Andrew Jefferson and Carly Gonzalez and her husband Otto Gonzalez.

Len was a longtime member of Our Lord’s Lutheran Church where he served in many capacities including two years as Council President in the early 80’s.   Services to be held at Our Lord’s Lutheran Church (OLLC) on Saturday, May 11, 2019 at 11 AM with a reception following.  The address is 2900 W. Hefner Road, OKC, 73120.  In lieu of flowers, and due to Len’s love of music and devotion to his church, please consider a donation to the church’s music program.