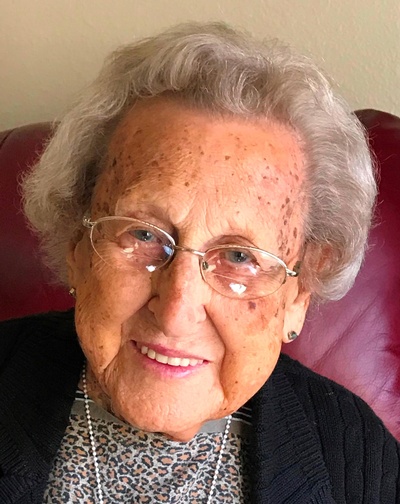 Lillian Izora Brooks, age 98, passed away peacefully on Jan. 25, 2018. Lillian is survived by her son, Lynwood Brooks and his wife, Beth, of Missoula, MT; grandson Greg Brooks and his wife, Deana, of Searcy, AR; grandson Michael Brooks and his wife, Angela, of Southlake, TX; and granddaughter Kimberly Judd, and her husband, Ty, of Coeur d’Alene, ID.  She is also survived by eleven great-grandchildren: Emily, Joshua, Melody, Jordan, Piper, Mallory, Benjamin, Brooks, Garrett, Katelyn & Quinn, as well as numerous nieces and nephews.  She is proceeded in death by her husband of 60 years, Bernie Brooks, her parents Albin & Nellie (Elliott) Bailes, and her brothers and sisters: Arvel, Deulin, Edward, Mable, Bertha, & Calvin.  Lillian was born in Maxwell, OK, on a small farm just outside Konowa, OK.  She attended Vamoosa High School where she was an All-State basketball player.  She took a job at Douglas Aircraft in Tulsa in 1940. She worked alongside other women building airplanes used in WWII.  In 1942, she went on a blind date with a young man, Bernie Brooks.  He would become the love of her life. In 1944, they were married in Shawnee, Oklahoma.  Over the next 60 years, their marriage would provide an example for many of the love, devotion and support found in a Christian marriage. She later worked at Western Electric where she was employed for over 20 years and was a member of the Telephone Pioneers’ club.  Bernie and Lilllian were faithful members of the Capitol Hill, Grand Boulevard, and South Walker Churches of Christ in OKC, where Lillian served the church working with young people.  As Bernie became involved and advanced to president of the Refrigeration Service Engineers Society (RSES), Lillian was also active at the local and national levels. She was honored as the First Lady of RSES in recognition of her years of service. She was also proud of the recognition of her efforts to support the war, receiving the ‘Rosie the Riveter’ award.  Funeral services will be on Thursday, February 1, 2018 at 1:00pm at Buchanan Funeral Services in Oklahoma City.  She will be laid to rest at Resthaven Cemetery in Oklahoma City beside her husband, Bernie. In lieu of flowers, the family requests donations be made in her name to “In Search of the Lord’s Way” at http://www.searchtv.org/. Special thanks and great appreciation is due to the staff at Spanish Cove in Yukon for the loving care, hugs, and patience they shared in her final years.