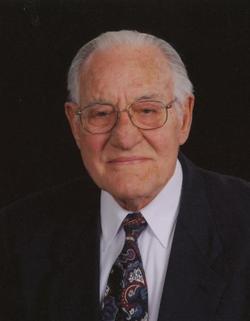 Lloyd Chester Byrd, World War II Veteran, passed peacefully from this earthly life on April 8, 2015. He was born on August 11, 1924 in Chelsea, Oklahoma to Lillie Grimes and Alford Hurdy Byrd. He was preceded in death by his parents, his wife, Minnie Classen Byrd, his brothers Roy, Troy, Vernon, Wayne, and Carl. He is survived by his brothers Claude Edward, Gene, and his sister, Mary Lou Hostetter. He is also survived by two daughters, Kaie Stewart and Grace James and her husband Michael. Grandchildren surviving him include Erin Stewart and husband Johnny Moore, J. Fred Stewart and wife Laurie, Jacqueline Wicker and husband David, and Joshua James. Great-grandchildren who survive him include Kendall, Reese, and Ava Stewart. Also, Laine Moore, Kaden and Madelyn James, and Grant and Grace Wicker.

Lloyd joined the Navy during WWII and served with the Seabees in the Aleutian Islands and Okinawa, Japan. After the war ended, he also served in the Naval Reserve. Recently, he took an Honor Flight to visit the WWII Memorial in Washington, DC.

Lloyd utilized the skills he learned in the Seabees for the rest of his life. Early on, he worked for the Santa Fe and Missouri Pacific Railroads. Later, he worked for truck lines, and then formed his own trucking company, Overland Freight Lines.

Lloyd loved his children, grandchildren and great-grandchildren, and was always interested and excited about their accomplishments and activities. He was always available for them.

His passions were the restoration of his father-in-law's 1926 Model T and genealogical research into his family tree.

Visitation with family in attendance will be from 4 to 7 p.m. on Sunday, April 12. Open visitation will be from 9 until 5 Monday, April 13. Services will be held at 2 p.m. on Tuesday at Williams Memorial Nazarene Church, 6900 N. W. 50th Street in Bethany.