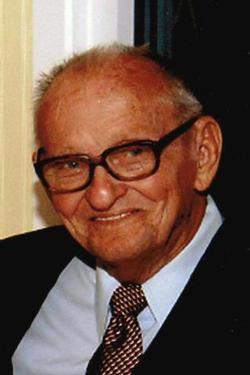 Lloyd Lee Elliott, age 89, has gone to his heavenly home. He was one of twin boys, Lloyd and Floyd, born to Ed and Sarah Elliott, a sister Mary Jane.
He was proud to be a member of the "Greatest Generation" in American History; serving in the Army Air Corp, a member of the thirty-fourth Bomb group, serving as a tail gunner on the crew of the "Flying Dutchman", B-17; flying numerous mission over Germany.
Lloyd and Carol married 66 years, had a beloved hobby, known nationwide in many states for their 1913, Cadillac, 1920 Dodge. From coast to coast they attended countless conventions driving their cars with pride, the cars were not only cars they were members of the family. He always said if the car does not run you figure it out; it is either fuel or fire he was right. Many friends were gained by this couple, respected, admired, but not always understood, but they were faithful to their hobby even to the end, telling his son last minute details of things which he needed to know to continue the legacy. He was one of the hardest working people you ever want to know, having a standard the way he wanted it to be done no compromise. Owning his own business for many years. Lloyd is survived by wife Carol Elliott, of the home, Son Larry Elliott, his wife Barbara, grandchildren Melanie husband Jake Tijerina, Knowle and Pam, Lindsey, Ryan and wife Andrea, great-grand children Ashley, Caleb, Isabella, Triston and Gavin. He was proud of his family commenting many times what a wonderful group of people they had become.
Family visitation will be Wednesday, October 23, 2013 from 5 PM to 7 PM. Services to celebrate his life will be Thursday, October 24, 2013 at 1:00 PM at the Buchanan Funeral Service Chapel.