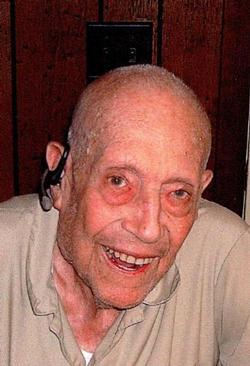 CLAWSON,
Lloyd Thomas, 97, passed away peacefully at 1:22 am, Tuesday, July 24, 2012. Lloyd was born in Holdenville, OK on June 21, 1915 to Dora Thomas and Louis Lloyd Clawson. Lloyd was preceded in death by his parents and his younger brother, Marion E. Clawson. Lloyd graduated from Holdenville HS in 1933 and worked until he was called to military service on March 6, 1942 and after basic training he was shipped overseas in May, 1942 and was assigned to the Army Services Division and on May 5, 1945 he returned to state side and later discharged from the Army. Soon after he met and married Sue E. Dodson in 1947 in Holdenville. For a number of years Lloyd worked in the news paper business in Holdenville, serving at such duties as letter setting for print machine operations. Later in 1947 he and Sue moved to Oklahoma City and they both worked for the Daily Oklahoman for a number of years. After their retirement, they traveled to South Texas to the Mission and McAllen areas where they camped with other retirees and their later years after they stop traveling, they settled in Oklahoma City. They were members and enjoyed activities of several Radio Clubs. After his wife's death in 2001, after 54 years of marriage, Lloyd continued to be active with the Radio Clubs. Viewing will be 12:00 noon to 8:00 pm on Wednesday, July 25 at Buchanan Funeral Service. Graveside service will be 2:00 pm, Thursday, July 26 at the Holdenville Cemetery, 11th and Pine in Holdenville, OK.