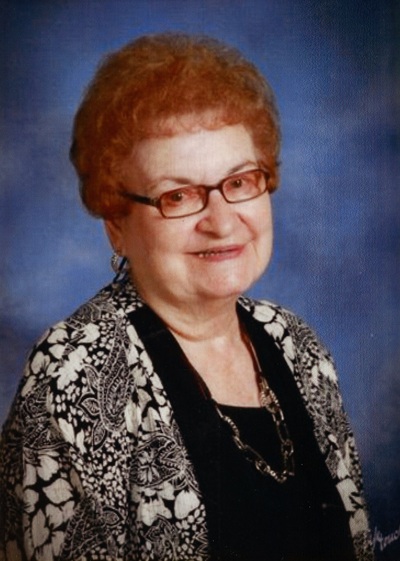 Margie Louise Soudek was born April 21, 1928, in Kingfisher, Oklahoma to Edwin John and Mary Martha (Hobza) Buettner.  She graduated from Kingfisher High School in 1946.  She met Joseph Edward Soudek at a dance and they were married April 18, 1950.  Margie and Joe were married for 49 years and had three children.  Her love of family and celebrations provided many wonderful memories of food and fun at Joe and Margie’s house in Kingfisher. Margie was a homemaker, farmer’s wife and loving mother to her children first, but when she and Joe moved to town, she started working at the cafeteria at SS. Peter and Paul School, where her children attended school.  Eventually, Margie became a secretary at Washington Elementary School. She also worked as Deputy County Superintendent for Kingfisher County for many years, and when that office closed, she worked in the Kingfisher County Clerk’s office until her retirement.  Margie was a member of SS. Peter and Paul Catholic Church and the SS. Peter and Paul Altar Society.

Margie joined the community of St. Ann’s Retirement Center in 2013 and her “family” grew to include the loving staff members that cared for and loved her.  She was especially proud of showing off her lifetime collection of salt and pepper shakers to visitors who came to tour St.  Ann’s.

Margie is survived by her daughter, Jodie McKleroy and husband John,  her son, J.E. Soudek and wife Linda, all of Oklahoma City, a son-in-law Jim Kraus of Davis; two brothers, Richard Buettner of Oklahoma City, and Charles Buettner and wife Nancy of Grand Junction, Colorado, one sister, Delores Graham of Oklahoma City, a sister-in-law Karen Buettner of Yukon, and a brother-in-law Frank Soudek of Pueblo, Colorado.   Margie adored her thirteen grandchildren, Brenda Kraus Williams(Stephen) and Karla Kraus Scott(Jason) of Davis, Kevin Moore of Oklahoma City, Meredith Moore of Baltimore , Jessica Soudek Roberts(Justin) of Edmond, Joe Soudek, Shane Soudek and Katie Soudek of Enid, Jimmy Kraus of Kingfisher and  Kristy Kraus Scroggins(William) of Kingfisher, Heather McKleroy Osmulski of Peoria, Illinois, Michael McKleroy(Amy) of Dallas, and Joe McKleroy of Nashville, as well as many great grandchildren. Margie never tired of talking about her kids, grandkids, and great grandkids, and family dinners were her very favorite thing to plan.

Margie was blessed to receive love and care from the many staff members at St Ann’s Retirement Center and at St Ann’s Skilled Nursing and Therapy and her family would like to thank them for everything they did for her.

A Mass of Christian Burial will be held at 10 AM on Thursday, June 2nd at Sts. Peter and Paul Catholic Church in Kingfisher.

In lieu of flowers, donations may be made to the American Macular Degeneration Foundation at https://www.macular.org/