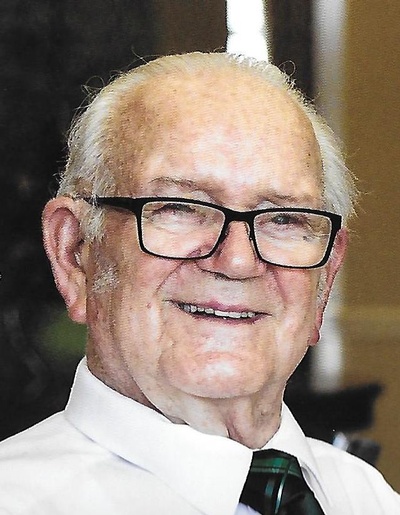 Marvin was a graduate of Fairview High School and Enid Business College.   He married Irene Wendt on April 4, 1948 at the Evangelical and Reformed church, in a building that was later remodeled into what became their home.  After a short period living in Clovis, New Mexico, the couple moved back to live and work on the family farm northwest of Kingfisher.  Marvin worked in the accounting department of Solomon Agency.  He then began work at Pioneer Telephone, and eventually became the Data Processing Supervisor, which he enjoyed thoroughly until his retirement.

Marvin enjoyed painting, singing, and basketball, but his favorite activity was people.  He enjoyed visiting with everyone he met and sharing stories.  He was a proud WWII veteran, assigned to the 96th Infantry division (the “Deadeyes”) which saw action in the Pacific Theater.   Attending annual 96th Division reunions at various locations around the country was an annual highlight for Marvin.

He was an active member of the Federated Church in Kingfisher, singing in the choir and serving on various boards for many years.  He published a monthly newsletter (The Gleaners) for seniors.  He and Irene were involved in the elementary school reading mentorship program and delivered meals for Meals on Wheels.  Marvin was instrumental in the development of the Rural Water district for Northwest Kingfisher.   He was a strong supporter of the Chisholm Trail Museum, serving in many capacities, including president of the board of directors.

Marvin was preceded in death by a brother, Eugene Reames.