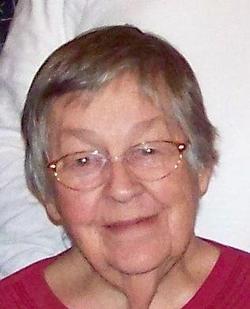 Mary Ruth Heath, aged 94, died September 4, 2014 at Mercy Hospital in Oklahoma City, OK. She was born August 19, 1920 at McQueen, Oklahoma in Harmon County to John Newton Culbert and Mary Alice Whatley Culbert, the youngest of their six children. She graduated from Gould High School as valedictorian in 1936. Because she was thought too young to go off to college, she stayed at home for a year and entered the University of Oklahoma in the fall of 1937. She graduated from OU June 9, 1941 with a BA in Journalism and married Larman Jefferson Heath that same day. They made their home in Oklahoma City until he was called up for service in Europe in 1942. After the war they lived in Oklahoma City until 1950, Walters 1950 to 1952, Bartlesville 1952 to 1956, Muskogee 1956 to 1960, Bartlesville 1960 to 1997, and Oklahoma City 1997 to the present. Larman died October 27, 2008.

Mary Ruth worked as a caseworker and casework supervisor for what was then known as the Department of Public Welfare in Cotton County and Washington County. She served on the Bartlesville Board of Education. She was a lifelong member of the Church of Christ.

Services will be 1:30 PM, Monday, September 8 at Buchanan Funeral Chapel with interment at Memorial Park Cemetery. Family visitation will be Sunday, September 7, from 6:00 PM to 8:00 PM at the Funeral Home.