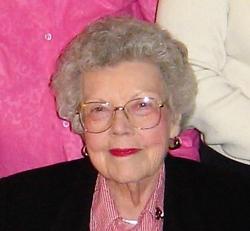 The Graffs moved to Tulsa in 1957 and spent 40 wonderful years there. Maxine taught first grade at Riley and Carnegie schools. She loved her 29 years of teaching and was devoted to the idea of getting children off to a good start. In Tulsa they were members of Christ United Methodist Church. In 1997 they moved to Oklahoma City to be near their daughter. They became active members of Village United Methodist Church.

Maxine and George were world travelers, visiting more than 200 countries and taking three world cruises – the last one at the ages of 82 and 81. Maxine loved life and approached it with great enthusiasm and an immense intellectual curiosity. She enjoyed reading, playing bridge, entertaining, and encouraging and supporting everyone. Lifelong friends included her OSU Alpha Delta Pi sorority sisters, church family, past students and fellow teachers and friends from her many travels and activities.

Family was everything to Maxine. Every grand- and great-grandchild knew they held a very special place in her heart. Maxine lovingly made scrapbooks for each of them. Holidays were full of wonderful traditions. Her home was filled with Nativity Scenes that she and George collected from all over the world. Everyone looked forward to her beautifully written Christmas letters each year.

Maxine's life had its share of loss and hardships, but she always managed to pick herself up and find joy in living. She lived a beautiful and full life and was admired and loved by all those who knew her.

Services will be held at 1:30 on Tuesday, December 13, at Village United Methodist Church and interment in Crescent, OK. In lieu of flowers, donations may be made to Village Methodist Church.