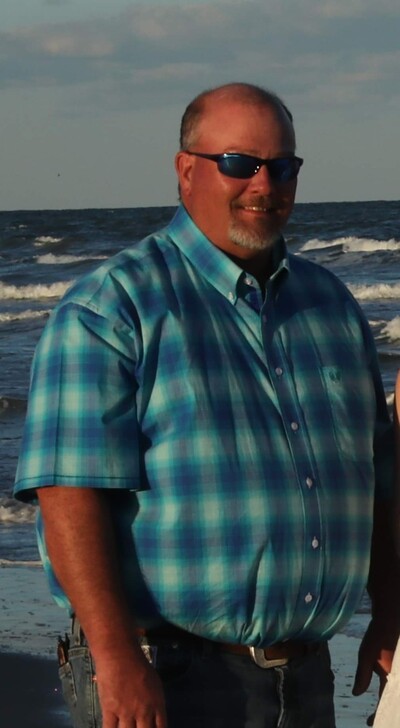 Michael Chad Humphrey was born January 22, 1970, in Elkhart, Kansas, to Verle and Sherri (Fisher) Humphrey. He passed away January 23, 2022, in Oklahoma City, Oklahoma at the age of 52 years and one day.

As a boy, Chad’s favorite place was in a truck seat next to his dad. As most people know, shifting gears on a big diesel engine is a difficult skill to learn. Chad learned it just watching Verle shift gears. Trucks were in his blood from the beginning, and over his life he mastered all the driving and mechanical skills necessary to be a successful operator.

He graduated from Syracuse High School in 1988 and attended Dodge City Community College. During that time he realized that his passion was truck driving, and he began that career. To the end, both as employee and as self-employed trucker, Chad worked constantly to be profitable for those he worked with, and to be a good provider for his family.

In 1991 he met the one love of his life, Mandy Smith, and just over a year later, on November 14, 1992, they were married in Guymon, Oklahoma. On August 6, 2000, they were blessed with the birth of their daughter and the second great love of Chad’s life, Tiffany.

Chad had a love for the simple things of this life, usually in the company of his family. He loved the swimming pool in the summer, and he treasured his motorcycle. Brisk Kansas spring and fall evenings were spent around the fire pit he built at their home, visiting and listening to music.

His heart was also evident with animals. In 2010 Chuck and Odie Humphrey, the family’s terrier/Corgi mix dogs were added to the family. Chad loved playing ball with Chuck and rubbing Odie’s belly.

Chad’s life was marked throughout adulthood by his willing heart to help others with needs. It blessed him to give his time, his physical effort and his treasure whenever it was needed. He touched and changed the lives of many men around him for Jesus Christ by both his words and his example. Chad was not ashamed of the Gospel, the good news, of Jesus Christ.

Chad is survived by his wife of 29 years, Mandy, by his daughter Tiffany, by his parents, by his brother and sister-in-law Kyle (Layle), their three sons Harper, Hank and Holt, by his mother-in-law Linda, by Mandy’s sister and brother, Neta and Josh and their families, by cousins Kevin Humphrey, Kendall Humphrey (Carol), Jarod Humphrey (Sarah), and Jeremy Humphrey (Tasha) and children.

He is preceded in death by his brother Vincent and sister-in-law Jackie.

Services will be at the Dodge City Church of the Nazarene, 1700 W. Ross Boulevard in Dodge City, at 1:00p.m., Saturday, January 29. Donations made be made in care of Mandy Humphrey for the expenses surrounding Chad’s illness and for Tiffany’s education.