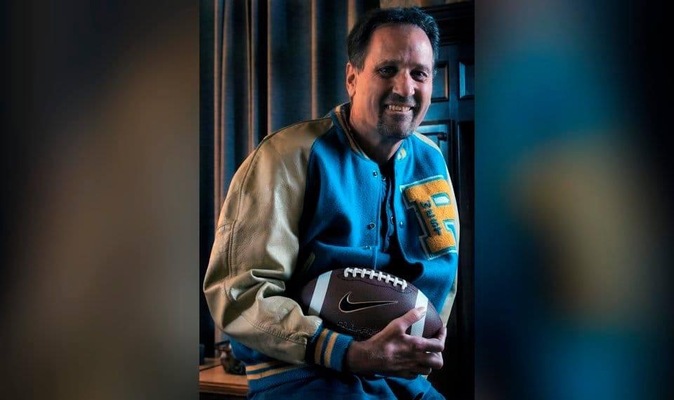 Service recording is available at this link: Michael Cutter Service.

Michael graduated from Putnam City West High School in 1982 and earned a degree in Management Information Systems from University of Oklahoma, in 1987. He was a successful home builder and developer, and owned a textiles company, DMI Wholesale Textiles.

Michael’s first love was his Lord and Savior, Jesus Christ. But his adoration for his family and sports was a close second. His great big ornery smile, sparkling eyes and ability to forgive, were the special qualities that anyone who knew him will never forget.

He was an outstanding athlete in both baseball and football.  He was instrumental in leading the  PC West high school football team to their only victory to date in the State Championship, in the 1981 season. Years later, after he was diagnosed with ALS in 2016, his high school classmates rallied together to honor him by establishing a scholarship in his name, A Cut Above. He was honored to be able to present the award to the scholarship’s first recipient. In 2019, both his amazing character and his stellar performance on the football team, earned him a seat in the Putnam City Hall of Fame, in its inaugural year.

The family would like to extend sincerest gratitude to the Putnam City West Class of ’82 and all of his other friends and caregivers, for going above and beyond to help Michael and his family in his journey through ALS.

Due to COVID safety mandates, the funeral is very limited capacity, allowing for mostly family and very close friends on Friday, December 18, 2020 at 1:00pm, at Buchanan Funeral Service. However, there will be a virtual presentation of the services, which can be found on the funeral home website Buchananfuneralservice.com

Michael will be laid to rest at Resurrection Cemetery (7801 NW Expressway, Oklahoma City) In lieu of flowers, please consider donating to the ALS Association at donate.als.org/donate.