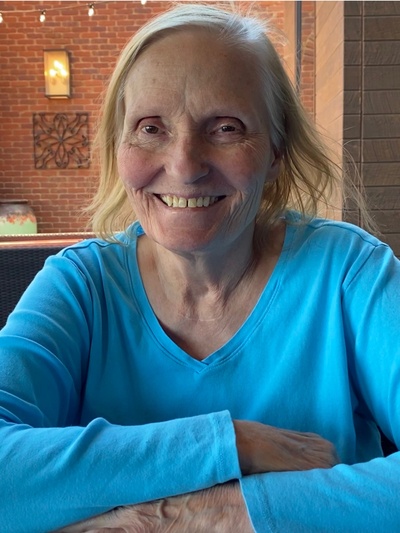 Myrna Beth Burlison was born on December 19, 1943 in Mooreland, Oklahoma. Raised by her grandparents, G. A. and Emma Wahl, in Canton, Oklahoma, she and her brothers, Ray and Bob Burlison, developed a fierce work ethic. She would proudly tell the story of how she earned money for a doll by picking cotton. She played the trumpet in the high school band and began playing piano for churches at the age of 13 and continued until the age of 71. She worked part time in her grandfather’s store stocking and dusting shelves and as a soda jerk at the local pharmacy. When visiting her older siblings in Wichita, she would work as a carhop. She even met Colonel Harland Sanders of Kentucky Fried Chicken fame.

Beth was named Canton High School valedictorian. She furthered her education by attending college at Southwestern Oklahoma State University and the University of Central Oklahoma; graduating with a degree in medical technology.

She was riding around with friends, when she met the love of her life, William Anthony Geiger. He had just returned from his tour of duty in Germany. They married on December 20, 1963.

She worked as a medical technologist at Medical Arts Laboratory and Saint Anthony Hospital. Her career spanned over thirty years. During this time, she earned numerous certificates of proficiency on several pieces of laboratory equipment. She also was presented with several distinguished employee awards.

She was a dedicated member of the Longdale Community Church serving as musical director, organizing holiday programs, and working with the youth program. Beth loved being a part of the community and worked to support the Longdale Gym Association. She loved antiquing, hosting hunting weekends for her son and his friends, and baking brownies, cookies and fireman’s lasagna for her grandchildren. She was also an avid football and basketball fan, cheering on the Sooners and her beloved Cowboys. She traveled with her children from Colorado to Thailand. She and her husband enjoyed raising cattle during their retirement years. They could often be seen driving around the countryside in their white farm truck.

Beth joined her husband, William, in heaven on September 15, 2021. She was preceded in death by her grandparents, G. A. and Emma Wahl; her parents, Leonard Grady and Marguerite Burlison; siblings, Vernon and Bobbie Burlison, JoAnne and Bill Natenson, Richard Burlison, Robert Burlison, and Ray and Lue Burlison, and her nephew, Kevin Burlison.

The family would like to thank Kristina Friend, Chris Barnes, Sharon Thompson, Barbara Rodriguez, and Juanita Rodriguez. These wonderful caregivers treated her like family and allowed her to remain at home until her final days.

Donations can be made to the Integris Hospice House in lieu of flowers.