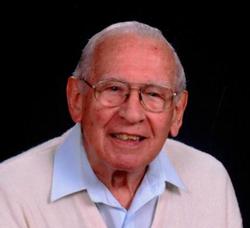 Nicholas P. age 94 of OKC went to be with his Heavenly Father on July 5, 2014. He was born February 16, 1920 in Cincinnati, OH to Nicholas and Sophia "Haas" Jung. He married the love of his life, Freda Lang in Petersburg, VA on October 17, 1942; she preceded him in death in 2005. Nick served his country in WWII in the US Army stationed in Algeria, Africa, Rome, Italy and Camp Lee, VA. He was discharged on December 7, 1945 as Master Sergeant. After his service he managed FW Woolworth stores and progressed to toy buyer for TG&Y stores for 23 years; then became a sales representative for Newton MFG for 23 more years. Nick was a longtime member of Messiah Lutheran Church. He served on the Stewardship Board, sang in the choir, served in youth ministry and assisted with lawn care. He was also involved with Junior Achievement and was a member of the Elks Lodge. Nick is survived by his 3 children: Son, Robert Jung and wife Nancy; daughters, Barbara and husband Eric Wassilak, Kathy and husband Brandon Wycoff; Sister Eleanor Hayes of Cincinnati, OH; niece, Karen Hersman and husband Jay 8 grandchildren; 6 great grandchildren and many other family and friends. Visitation will be Thursday, noon to 9PM and family will be receiving visitors from 7-9 PM. Services to celebrate his life will be 10:00 AM, Friday, July 11th at Messiah Lutheran Church with internment at Rose Hill Burial Park. In lieu of flowers, donations may be made to Messiah Lutheran School; 3600 NW Expressway; Oklahoma City, OK 73112.