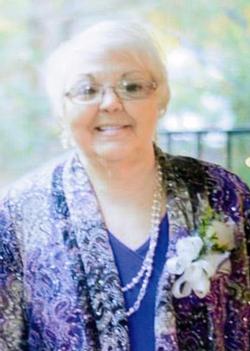 Nina Nichols Padgett was born to Carson and Maxine Nichols on October 17,1947 in East Liverpool OH. She grew up in Newell West Virginia. After her father passed away Maxine and Nina moved to Oklahoma City where Maxine met John Davila. John and Maxine wed and John accepted Nina as his own daughter. Nina met Earl and they married March 14,1970 and have been married 47 wonderful years. Nina had three children, Donna, Amy and Randy, which brought Nina and Earl six grandchildren, Russell, Jay, Hayley, Mackenzie, April and Treston. She has five great grandchildren, Kallie, Harper, Kellen, Jackson and Braelynn. Nina’s family meant the world to her. She loved them very much. She always looked forward to family get together’s and you would spot her in the back just admiring her family that she loved so much. She was a loving wife and mother and grandmother. She will be greatly missed. We know she is finally healed and rejoicing in Heaven!