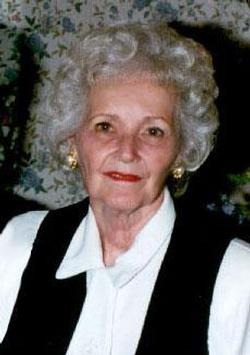 Patricia May Hough Knight, 89, of Oklahoma City, OK, peacefully passed away at home on April 3, 2014. She was born May 28, 1924, in Tulsa, OK, to Flossie (Williamson) and Wallace M. Hough, Sr. They preceded her in death as did her husband Eugene M. Knight and siblings Wallace Jr., Elizabeth White, and Carolyn Gottschalk. Pat is survived by her sister Cathleen (Hough) Herndon, cousins, nieces, nephews, and friends as well as by her children and their families: Patricia (Knight) and Joe Saunders, Edwin and Annie (Burnell) Knight, Allan Knight and Cearan Henley, Martha Knight and her daughter Anna, and Philip Knight.
The Houghs raised their children in a Christian home. Pat accepted Jesus as her Savior at an early age and always said "Oh Happy Day" was her favorite song because it expressed her feelings exactly. Along with the rest of her family, she participated in many activities at their church, First Baptist, Tulsa, and loved summer camps at Falls Creek.
Music and art played a large part in her life; Pat played piano, violin and marimba. As the Hough Family Band, she and her siblings performed for home, school and church events; a few friends sometimes joined in. Pat and her sisters sometimes sang as a young women's quartet. She enjoyed visiting Philbrook and Gilcrease Museums especially and sometimes sketched or painted roses and other plants and the buildings.
A conscientious student, this 1941 graduate of Tulsa High School attended Baylor University, Waco, and the University of Oklahoma, Norman. At Baylor, she was in the marching band and the Baptist Student Union as were her brother Wallace and sister Betsy. Her art studies at OU plus the growing war effort led her to a job creating project drafts and detailed renditions for an engineering firm.
In 1944, she met the love of her life when Captain Eugene Knight of Alabama and some of his flight crew sat in the pew behind her and her family one Sunday in Tulsa. The Hough girls scarcely heard the sermon because of these handsome young servicemen. Pat eventually won Gene's attention, and they were married November 11, 1945, after the pilot received his discharge from the service.
During their early years together, Pat and Gene kept house in the many oil field towns where Gene's work took him. The Christian couple always found a church to attend, and Pat was pleased that her new husband enjoyed music as much as she and that he sang in the church choir and with quartets.
The couple's joy grew as their children started arriving. Pat enjoyed helping her kids with schoolwork and teaching them the principles she had been raised with. Her happiest moments were seeing each child pledge to live with Jesus as their Savior.
With each promotion Gene received, the moves were less frequent. After their son Philip was born with Down Syndrome, Pat sought out special schools and training for him wherever they lived. She shared what she learned so the family could help Philip become a productive, happy person.
As the older children set out on their own, Gene started his own business in the early 1980s and moved the family one final time to Oklahoma City. There, Pat discovered the Dale Rogers Training Center and its director Connie Thrash McGoodwin. The skills and energy of these two women complemented each other from the first; together and with the Board of Directors, they generated a number of new programs and educational services for developmentally disabled individuals like Philip. At the center's 60th anniversary in 2013, Pat was recognized for her service as a former board member.
The years in Oklahoma City brought many life changes. Pat and Gene celebrated the birth of their granddaughter Anna in 1994, the same year Gene suffered a stroke. The following year, they marked their 50th anniversary while Gene was still recovering. Pat provided the in-home care he needed until he passed away in 1997, after which she continued caring for Philip, working at her church and with Dale Rogers Training Center, and helping to care for Anna.
After many years of devoted and untiring care for her ailing parents, family members, and husband, she noticed her own declining health and had to acknowledge it was time to take care of herself. As always, she made the best of the doctor's diagnosis and knew when it was time to join Gene and the rest of her family and friends in Heaven. The hard part was leaving so many behind whom she loved so dearly, but she had faith that all would work for the good for those who loved her Lord. And so it is.
Our family wishes to thank the many caregivers and service providers for their capable and loving attention to Mother's needs during her final months with us.
On Friday, April 11, two memorial services are scheduled: the first, at 9:30 a.m. at Quail Springs Baptist Church, 14613 N. May Avenue, Oklahoma City, OK, 73134, and the second, at 2:00 p.m. at Memorial Park Cemetery Chapel, 5111 S. Memorial Dr., Tulsa, OK, 74145. In lieu of flowers, the family requests donations to Quail Springs Baptist Church Building Fund; or Dale Rogers Training Center, 2501 N. Utah, Oklahoma City, OK 73107; or to the organization of your choice.