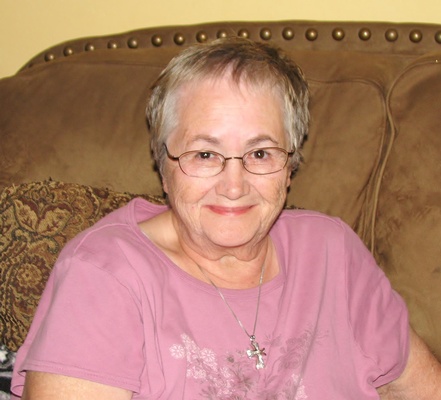 Patsy Lee Maguffee (Collins) went to be with her heavenly father, family, and friends on March 9, 2018. She loved her family and excelled at bragging about her grandchildren and great-grandchildren. Pat was born in Salem, Arkansas to Emory Collins and Helen McClellan Collins, and was a graduate of Salem, Arkansas high school. Her adult life was spent in Oklahoma City with husband Billy Jack, establishing roots and raising their family. Pat married Billy Jack Maguffee on July 18, 1953 and was the mother of daughter Barbara Michelle, sons Ronnie Lee, Phillip Wayne, and step-son Billy Neal.

Pat worked as a Labor and Delivery Scrub Tech at Deaconess Hospital for four decades and assisted in the delivery of thousands of babies. She holds fond memories of the co-workers and physicians that shared in the joy of those many unique life beginning events. She retired in 2000, and spent the last several years residing in south Oklahoma City at an Independent Living Center, before her most recent illness.

With strong convictions and a lover of conversation, Pat would engage in any topic at any time and with anyone, including on Facebook. But, her favorite conversations centered around family and her bragging rights for all of the little ones. She dearly loved her family and demonstrated that love every day of her life. In the last few years, she enjoyed day trips with her daughter Michelle and son-in-law Ronnie. And, she craved biscuits and gravy at Sherri’s Diner in south Oklahoma City.

Pat was preceded in death by her husband Billy Jack, sons Phillip, Ronnie, and step-son Billy Neal. She is survived by daughter Michelle and Ronnie Keith of Oklahoma City, daughter-in-law Toni Maguffee of Yukon, OK and grandchildren Jennifer and Ryan Allen of Celena, Texas, Somer and Todd Tramba of Oklahoma City, Ashley and Chad Gragg of McAlester, Stephanie and Derek Meder of Oklahoma City, Julie and Ben Head of Yukon, Marissa Maguffee of McAlester, AJ Maguffee of McAlester, Becky and Jon McReynolds of Viola, KS, Barry and Lana Nelson Keith of Norman, and Terry and Anna Keith of Yukon. She is also survived by her only sibling Barbara and Jim Scott and their children, Jeanie, Cindy, Susie, and Jamie and their families. In addition, Pat is survived by 18 great-grandchildren and multiple nieces and nephews and her extended Arkansas family members.