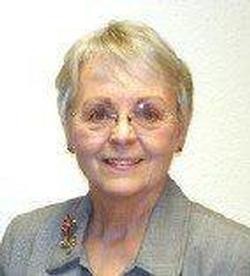 Peggy was born in Muskogee, OK, to Beatrice Jane Adams and Owen Buddy Cagle. She graduated from Cushing High School and married her high school sweetheart in 1957. She was a valuable asset as a secretary/bookkeeper to every company she was employed with, starting at the State Capitol and retiring from Mustang Fuel. She was an accomplished baker and cook, having won over 100 state fair ribbons, more than half of them blue. Her recipe for Strawberry Cake was even printed on the back of a popular cake flour box. She was owner of the Rose Garden Tea Room for nine years, where many of her award-winning recipes were served. She sewed, knitted, embroidered, crocheted and smocked dresses for her grandchildren, winning awards for her handiwork as well.

Peggy's most important legacy is her faith. She was a faithful Christian who set a loving example for her husband, parents, children, grandchildren and friends. She gave generously of her time, talent and possessions. She was our family's best and we miss her beyond words.

Services to celebrate her life will be at 2:00pm, Monday, April 13, 2015, at the North MacArthur Church of Christ. Flowers may be sent in her honor to the Church.