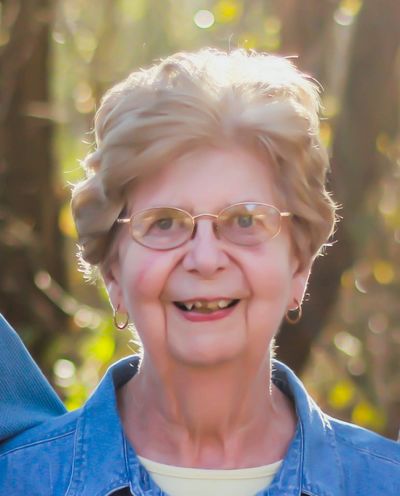 Phyllis Jean Bell, beloved wife and mother, went home to Jesus on March 17, 2020, at the age of 81. Phyllis was born on April 21, 1938 in North Platte, Nebraska to Edwin and Lucille Miller, and later moved to Bellevue, where she graduated from Bellevue High School in 1956. She met the love of her life, Charles Bell, at First Bellevue Baptist Church and they were married on June 10, 1961. They had two children, Scott and Sheryl. After living in Minnesota and Michigan, they settled in Oklahoma City, OK, and raised their family.

Phyllis was a committed homemaker and enjoyed sewing, ceramics, and macrameing while her children were growing up. Later she worked for Flair Real Estate  and then Kemper Insurance. She was a longtime active member of Council Road Baptist Church and enjoyed time fellowshiping with her Sunday school class, as well as exercising with the “Okie Motion” crew  and attending the senior adult Bible studies at the Cube. She participated in Bible Study Fellowship throughout various years of her life. In later years, Phyllis enjoyed RV camping with her husband and the Scissor Tails Good Sam Club camping group. She was a huge fan of Gaither music.

In 1993, Phyllis had a heart transplant at Baptist Hospital and celebrated her 27 anniversary of her transplant this past January. Her family is forever grateful for this gift of extended time God provided her, and to the family who donated such a treasured gift during their own time of loss.

Phyllis is survived by her husband of 58 years, Charles; son, Scott Bell of OKC; daughter, Sheryl Bell of OKC; granddaughter, Autumn Bell and step-grandson, Alex Woolridge of Edmond; brother, Phillip Miller and wife, Linda of Bellevue, Nebraska; sister-in-law Joy Read and husband Glen of Arlington, Texas and several cousins, nieces, and nephews. She was preceded in death by her parents.

Viewing is Monday, 1:00pm-8:00pm at Buchanan Funeral Services, OKC, OK; family present from 6-8pm. A small service will be held in the chapel at the Buchanan Funeral Service on Tuesday, March 24 at 2pm. Interment will be at Spring Creek Memorial Cemetery, OKC, OK. A celebration of life service for the public will be held at Council Road Baptist Church at a future date to be determined.

In lieu of flowers, donations may be made to the missions’ ministry at Council Road Baptist Church, Bethany, OK; Integris Hospice House, OKC, OK; or the Alzheimer’s Association.