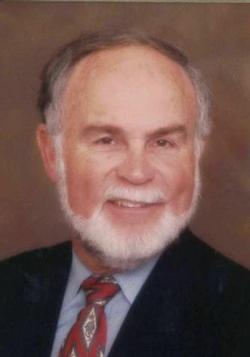 Ralph was born in Spiro, Oklahoma to Opel Leon Harvey and Berniece (Cox) Harvey. He graduated from Classen High School in Oklahoma City and went on to attend Abilene Christian College where he met the love of his life, Maxine Williams. They married in 1955. Ralph received his Master's degree in Geology from the University of Oklahoma and began his career as a Geologist in the Oil and Gas Industry. He founded Marlin Oil Corporation in 1972 and he successfully guided it though many industry cycles.

Ralph was preceded in death by his parents and wife, Maxine in 2013. He is survived by his daughter, Tracy Fields of Oklahoma City and his son, Dr. Mark Harvey and his wife Diane of Edmond; 5 grandchildren: Sheridan and Colton Fields, and Will, Lauren and Zachary Harvey; a sister, Wanda Johnson and her husband Thomas, and a number of nieces and nephews.

Ralph loved a variety of sports and participated in many through the years. Football, boxing, and baseball, were among his favorites. He was a Golden Gloves Boxing Champion in college and he loved to talk about his time playing American Legion baseball. Education was also very important to Ralph and he felt it was important to encourage young people to pursue their education. He was a key supporter of Oklahoma Christian University and the Harvey Business Center which bears his name. He was also a longtime supporter of Abilene Christian University, Harding University and York College. Children were very important to Ralph and every Christmas he would purchase Christmas gifts to send to all of the children of Tipton Children's Home, Westview Boys Home and Hope Harbor. Ralph was a long-time member of the Churches of Christ and always liked to look back at the many years he taught youth Bible classes at church. He was a generous supporter of church mission work through the years. He was currently a member of Memorial Road Church of Christ where his favorite job was being a church greeter and warmly greeting families each week. Ralph had many causes and organizations that were important to him that he generously supported through the years. He was a member of the Rotary Club of Oklahoma City and the Oklahoma Geological Society. He was also a member of Oklahoma Council of Public Affairs and received their "Forever Free" Award in 2009. He also served in many roles at both the local and national levels of the Republican Party. The cause closest to Ralph's heart and the organization he was most supportive of was the Cystic Fibrosis Foundation. Due to their commitment to finding a cure and generous support, Ralph and his wife Maxine were the first recipients of the OKC Chapter's Breath of Life Award.

Visitation will be at the Buchanan Funeral Service on Sunday, January 10, 2016 from 1-5 pm and Monday, January 11, 2016 from 9am to 8pm with the family receiving guests from 6-8pm. Services to celebrate his life will be Tuesday, January 12, 2016 at 10:00 am at the Memorial Road Church of Christ with burial to follow in Chapel Hill Memorial Gardens. The family would like to express special thanks to Visiting Angels Living Assistance Services and Oklahoma Kidney Care. In lieu of flowers, the family has requested that memorials be sent to the Cystic Fibrosis Foundation-OKC Chapter.