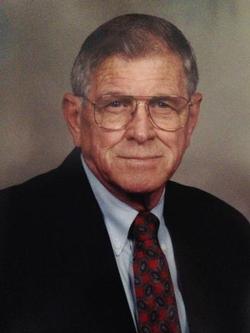 Raymond Charles Edge, 83, died Thursday, March 27, 2014 in Oklahoma City. He was born February 20, 1931 in Hobart, OK to Claude and Josie Edge. He was the youngest of eight children. Ray graduated from Hobart High School in 1950. He proudly served his country in the 45th Division as a tank commander in the Korean War. Ray had a long fruitful career as a lumber broker. He was a dedicated and loving husband, father, and grandfather. Ray had a peaceful calming presence and an infectious smile and laugh. He was a kind-hearted man. Ray was preceded in death by his son Rob Edge, his parents, three brothers, and four sisters. He is survived by his wife Sue Edge, son Mark Edge and wife Weneva, and four grandchildren Emily, Robert, Katie, and Vivian Edge all of Oklahoma City. Services for Raymond will be held at 10:00 on Saturday, March 29, 2014 at the Epiphany Catholic Church in Oklahoma City where he was a long time member. Preceding the services he will be laid to rest at Rose Cemetery in Hobart, Oklahoma. In lieu of flowers donations can be made to Catholic charities.