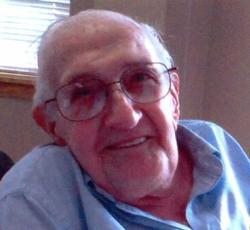 Raymond Gerald Metz, age 91 of Norman, OK formerly of OKC died January 30, 2012. He was born August 24, 1920 in Okeene, OK to William Metz and Annie Mary Waltersch Metz. He served his country in the US Army during WWII. Raymond met the love of his life, Hazel Alice Payne and they were married in Okeene on December 26, 1946. They moved to OKC and he attended Oklahoma City University, and went to work as a billing clerk for Mistletoe Express retiring after 38 years. He was an avid sports fan. Ray was preceded in death by his parents; his wife Hazel and a son Jerry. He is survived by 2 daughters, Mary Gilles and husband Monte of Pullman, WA; Theresa Metz of Alexandria, Va; a daughter-in-law, Tonia Metz of Castro Valley, CA; 2 grandchildren, Tony Metz and Mary Gilles, Jr; and Tonia&#39;s daughter, Melanie, and son, Anthony; a sister Betty Cain of GA and other family and friends. Graveside service to celebrate his life will be 2:00 pm, Thursday, February 9th with a Mass of Christian Burial at 5:30 pm at Little Flower Church.