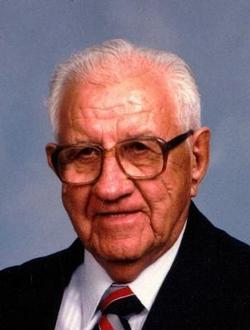 Rex G. Nance was born in Marietta, OK, to Blanton and Mary Ellen Nance. He grew up in the Marietta and Ardmore areas where his father and brothers were all carpenters. He graduated from Martha High School. He married Gloreta Williams in 1940 and they had two children. He served in the Navy during WWII. Upon returning from war he began his career as a home builder. He built homes in the Village and North OKC. He built the Village Baptist Church where he and his family were charter members. God and Family were important to Rex. He is preceded in death by his parents, wife Gloreta, infant daughter, his second wife Lovena, brothers, Ray, Roy and Riley Nance and Colbert Harwood, sisters, Omal Manning and Opal Gentry and infant great-grandson Joshua. He is survived by his children, Marilyn Austin and Robert and Sandra Nance, step-son Dan and Annette Martin, grandchildren, Shawn and Kari Austin, Ryan and Rachel Nance, Jason and Holly Austin and great-grandchildren, Lauren, Seth, Riley, Keely, Radley, Kolby and Rory. The family would like to thank Sooner Hospice for all the care they gave to Rex. Donations may be made in his name to Village Baptist Church. Services to celebrate his life will be 2:00 PM Tuesday, Feb. 21, 2012 at Village Baptist Church with burial to follow at Resurrection Memorial Cemetery.