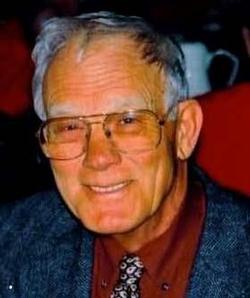 Richard Elbert Land, age 86, died peacefully Tuesday morning February 28, 2017 at 1:05 a.m. at his home in Oklahoma City after a lengthy struggle with Alzheimer's disease. Richard was born July 10, 1930 in Snyder, Texas. The son of Leamon and Minnie Land of Snyder, Texas. Richard graduated High School in Snyder, Texas and on March 14, 1953, Richard married the love of his life, Wanda Land. They were happily married for 63 years.

Richard is a U.S. Veteran having enlisted in the Air Force early in his career, and culminated his career at Tinker Air Force Base in Oklahoma City, retiring in 2010 at the young age of eighty. Richard enjoyed going to church and being around family and friends, believers in Christ, challenging others, sharing his faith, and giving whatever he could to the less fortunate. Richard is survived by his children Gary Land, Debbie Capps, Terry Land, Teresa Haynes and Curtis Land. Richard had twenty-two grandchildren and thirty-one great grandchildren.

Richard was a life member of the Churches of Christ beginning in Midland Texas, and moving his family to help build a Church in Somerville NJ. The family relocated to Oklahoma City in their next journey where Richard did pastoral work in one of the poorest parts of Oklahoma City. Richard and his wife Wanda spent the past forty plus years at Northwest Church of Christ in Oklahoma City, where he cherished spending time with friends and family. Richard spent his life encouraging his family to maintain their faith, and promoting God's grace and mercy to anyone who would listen.

There will be a public service open to family and friends at Buchanan Funeral Service Chapel in NW Oklahoma City on Friday March 10, 2017 at 10 a.m. Bill Day of NW Church of Christ will be presiding over the services.