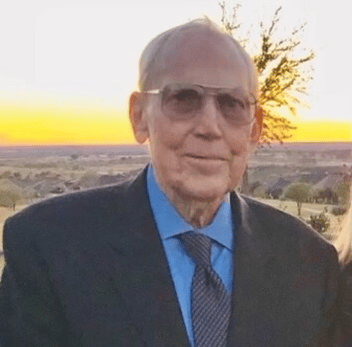 Richard was born in Wilson, KS on February 22nd, 1930 to Fred and Mary Svoboda, and was the eldest sibling to Joseph Svoboda.

After graduating from Wilson High School he began his career in telecommunications at Wilson Telephone Company. He moved to Little Rock Arkansas where he worked for Southwestern Bell Telephone
Company/AT&T as an Electrical Engineer until his retirement in 1990.

He met his future wife Betty Hosto in Little Rock. They were married on September 2, 1951. The couple was soon blessed with their daughters
Donna, born February 23, 1956, and Karen, born January 26, 1959.

Richard also proudly served in the United States Army and National Guard until his retirement in 1990.

After living happily in Little Rock until his retirement, he and Betty moved to a home on Grand Lake in Oklahoma where they enjoyed the Lake Life.

With their faith being an important pillar of their life, Richard and Betty were active and faithful members of St. Paul’s Lutheran Church in Fairland, OK, where Richard served as President of the Congregation.

Following the death of his wife Betty in 2013, Richard moved to Oklahoma City to be near his oldest daughter, Donna.

Richard was a committed member of Messiah Lutheran Church where he also served in two roles: Property Chairman & Guy-That-Can-Fix-Everything. When he wasn’t at church odds were he was at Woodbridge Restaurant enjoying a classic, American-style breakfast over and over and over. Through the years he enjoyed building model airplanes, working on short-wave radios, carpentry, delivering meals for Mobile Meals. He excelled at all.

He passed away January 10, 2023 with loved ones at his side. He is survived by his oldest daughter, Donna Wells and her husband Richard, of Oklahoma City and his youngest daughter, Karen Reade and her husband Will, of Spring, Tx as well as his grandchildren Lauren Harper and husband, Ross, Michael Reade and wife, Sarah, Natalie Downing and husband Grant, Melissa Rausch and husband, Michael, Patrick Reade and wife, Ashley, Brandon Reade, Catherine Reade, Sarah Reade, and Jessica Quinn and husband Aaron. He is also survived by 8 great-grand children.

Memorials may be made in his honor to Messiah Lutheran Church and School building remodel fund.