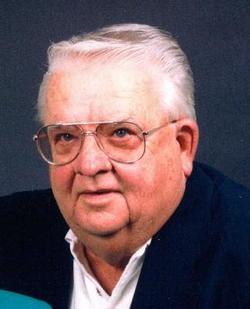 Robert (Bob) Aldridge, 82, of Oklahoma city, died with all of his family at his side, at Bellevue Health Center on January 28, 2012, after a yearlong battle with brain cancer.
Born on January 11, 1930, in Evansville, Indiana to Charles and Mamie Rauch Aldridge, he grew up in Evansville and attended college at the University of Cincinnati. He then transferred to Purdue University, was a member of Kappa Sigma Fraternity, and in 1953 received a degree in mechanical engineering. While still in college, he met his lifetime partner of almost 60 years, Jacqueline Johnson, marring her on August 30, 1952. He kidded every year that he wasn&#39;t sure whether he would renew her contract, although he would often admit that he was actually a very lucky man for her to put up with him so long.
After graduating from Purdue, he was employed for 15 years by Marathon Oil and was assigned to engineering positions that would take him and his family to cities across Illinois, Kansas, Oklahoma, and Louisiana. Bob was bold and never afraid of change, and decided in 1968 to try a different career and bought a Ford dealership in Holdenville, Oklahoma. Although he loved cars and was great with people, he soon discovered that it wasn&#39;t the business for him. In 1969, he sold the business, and returned to the oil business with Conoco in Oklahoma City, which would become his and Jackie&#39;s permanent hometown for the next 43 years. In 1974, he decided to become an independent petroleum-engineering consultant, drilling and designed and contracted three of their earlier homes and five in OKC, along with several he built for others. After retiring from the oil business in 1995, he continued home building as his final career and designed and built homes in Northwest OKC until a couple of year ago. After living in 19 residences in eight cities, they settled in their current home in 1999.
Bob was an avid sports fan and was particularly passionate about Purdue and OSU. He will be remembered for his quick wit, charismatic personality, and was adored by many good friends. Even though he didn&#39;t take all the credit, he said his greatest accomplishment in life was raising his three sons to be men that made him proud, and loved his grandchildren very much.
He is survived by his wife, Jackie; sons, Bobby and wife, Jody (OKC), Greg and wife, Susan (Ark City, KS), and Randy and wife Chris (OKC); five grandchildren, Bryan, Jeff, Cody, Piper, and Paige. Bob was preceded in death by his parents, and brother, Charles and sister, Hannah.