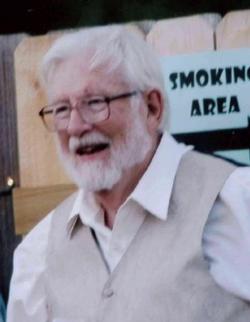 Robert Angus Jennings was born in Richmond, Virginia on November 1, 1928, the son of Joseph Ashby and Leone Bishop Jennings, the cheerful third of four sons. He remained ever a son of the Old Dominion. He grew up along the banks of the James River. He served his country in the United States Marine Corp, and attended the University of Richmond.

But his heart was restless to begin his work and family. All his long life he was a consummate salesman and preeminent book man, from his early days selling printing plates, then as a publishers representative for John Knox Press, Harper and Row, Abington Press, and Word Press, amongst sundry other publishing houses. He and his family moved frequently to accommodate his work, which suited his natural wanderlust and perpetual sense of hope in new beginnings. From Virginia to Washington DC to Tennessee to Texas to California to Oregon to Oklahoma, he chased and found his books. In the 1970's he owned a remarkable bookstore in Ojai, California, Bart's Corner. In his last years, he ran Bobby's Books, a shop in the Old Farmers Market in Oklahoma City.

Robert "Bob" was a prolific patriarch. There was nothing more important to him than his family, both his own progeny and the multitude of friends he made everywhere he went. Very few were those not charmed and captivated by Bobby Book.