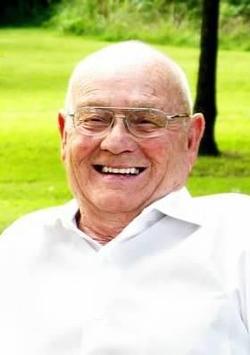 Boulter
Robert D. "Bob", age 84 of Muskogee, OK went to be with his Heavenly Father on December 13, 2012. He was born September 16, 1928 in Borger, TX to Young James Boulter and Gussie Mae Yeager Boulter. Bob was raised in Denver City, TX and attended the University of NM. He was a salesman in the oil and the insurance industries. Bob was a member of the Church of Christ and served his Father faithfully as a deacon in all ways especially the prison ministry. He met and married the love of his life Patricia Ann Wilson who was his devoted wife for 63 years. Her faithful care of him in the later years was a testimony to their beautiful love and an inspiration to all who knew them. After leaving TX they moved to OKC, then after his illness began to progress they moved to Ft. Gibson to be near their son. Bob was preceded in death by his parents and all his five siblings. He is survived by his loving wife, Pat of the home; daughter, Delphia Anne Horn and husband Keith of Flower Mound, TX; son, Robert Dowe Boulter and wife Patricia of Ft. Gibson; 7 grandchildren, 12 great grandchildren and many loving nieces, nephews and friends. Visitation will be Sunday, December 16 from 1:00-7:00 PM at Bradley Funeral Home, 1224 E. Poplar, Ft. Gibson, OK. Services to celebrate his life will be 9:00 AM, Monday, December 17th at Ft. Gibson Church of Christ with a service at Buchanan Funeral Service, 8712 N. Council Rd. in OKC at 2:30 PM with interment to follow at Resurrection Memorial Cemetery in OKC.