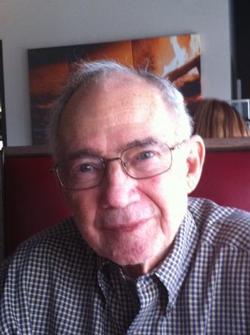 Bob was born in Norman, OK to Fred and Elizabeth Barkley. Bob along with his brother Bill and his sister Anne were raised by his Mother and Grandmother in Tecumseh, OK at the family homestead where his brother Bill Barkley resides. Bob graduated from Tecumseh High School in 1951. After high school, Bob attended the University of Oklahoma. He left OU to enlist in the Air Force with tours of duty in Libya and Scotland. While in Scotland, Bob backpacked through Europe. Bob returned to OU to receive his BS in mathematics and went on to teach elementary school math. The following careers included working for Mayflower hauling households as an over the road trucker. Along the way he met and married Beverly Renegar Ward in 1966 the mother of five sons. Bob adopted the boys, Chuck, Mark, Tracey, Perry and Scott in 1968 and raised them as his own. "The adoption of the boys was the nest moment of his life." Bob made a career change, taught himself computer programming and worked for the State of Oklahoma and Humpty Foods as a computer programmer. In 1983, Bob met Marilyn Johnson at the Oklahoma Bridge Studio. Bob loved to play bridge and became an accomplished Life Master Bridge Player. Bob married Marilyn in 1986. Bob finished his career with 15 years with Hertz as a computer programmer. In 1995, Bob joined Marilyn in operating Gathering Gifts Store until 2008. At that time, the store was moved from Hefner and Rockwell to the present location at the Market at Quail Springs. Bob in his lifetime quietly rescued many cats, birds, dogs, friends and family. He leaves behind a lot of love including his favorite cat, Buster and pet geese, Barney and Beulah. Bob was a member of First Presbyterian Church of Tecumseh, OK and faithfully attended Spring Creek Baptist Church in OKC. He is survived by his wife, Marilyn; Children, Chuck Barkley and wife Ashley of OKC, Mark Barkley of Poteau, OK, Tracey Barkley of Flower Mound, TX, Perry Barkley and Scott Barkley both of OKC; Step Children, Larry Johnson and wife Sherri of Las Vegas, NV, Sam Johnson and wife Jane of Edmond, OK, Stacey Southard and husband Mark of Burleson, TX; 10 Grandchildren, Amanda, Alicia, Michal, Chase, Andrew, Joshua, Robert, Madison and Clinton Barkley and Christina Gray and husband Bruce; 4 Step Grandchildren, Matthew and Alicia Johnson, Phillip and Russell Southard; His Brother Bill Barkley of Tecumseh, OK; nephew Vincent Powers; and his first wife Beverly Barkley. He was preceded in death by his parents and his sister Anne Barkley Powers. Visitation will be Tuesday, March 26, 2013 from 9 AM until 8 PM at the funeral home. Services to celebrate his life will be 11:00 AM, Wednesday, March 27, 2013 at Spring Creek Baptist Church, 11701 N. MacArthur in OKC with burial at 3:00 PM at Mission Hill Cemetery in Tecumseh, OK. In lieu of flowers, please make donations to The WildCare Foundation, 7601 84th street, Noble, OK.