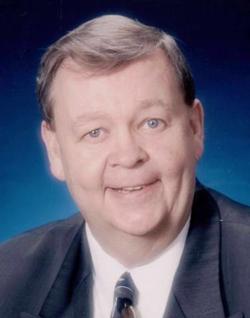 Ronald Coleman Edwards, age 72 of Piedmont, OK. He went to be with his Lord and Savior, Sunday, February 1, 2015. He was born February 28, 1942 in Pearl, Illinois to Martha Susan (Holloway) and Robert Coleman Edwards. Ron has always been a member of the Church of Christ. This has been a lasting legacy through his grandchildren. He has been known by those closest to him as a big teddy bear with warm hugs. His laugh was contagious and shook his tummy like a bowl full of jelly. Ron attended the U of I & SIUE majoring in accounting and business. He was a public accountant for many years along with owning a full line insurance agency. Later in life he received his degree from Sunset School of Preaching in Lubbock, TX and began his career in preaching at Henderson, NV; Chandler, OK; and Blvd church of Christ in OKC. In 2005, he moved to Piedmont with his wife Faye, to be near his family. Ron was instrumental in starting Soldier Creek church of Christ where he served as an elder and teacher until his passing. He leaves behind his family, friends, and church. With his influence, he helped change countless lives.

He is preceded in death by his parents; brother, Robert Ernest Edwards; sister, Ruth Drier; triplets, Matthew, Mark and Myer Edwards; and 1 nephew. He is survived by his wife Faye of 52 years; 3 children, Lori Edwards, Debbie Edwards and Douglas and his "daughter in love" Patti Edwards; 2 grandchildren, Hunter and Blair; and 5 nieces and nephews. The family requests in lieu of flowers, you may make donations to Oklahoma Christian Missions (Center for Global Missions; Box 11000; OKC, OK 73136) or Soldier Creek church of Christ missions (PO Box 144; Piedmont, OK 73078).

Services to celebrate his life will be at 2:00 PM Saturday, February 7, 2015 at Soldier Creek church of Christ in Piedmont.