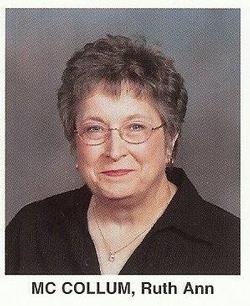 Ruth Ann McCollum
Services for Ruth Ann McCollum, 66, will be 10am Saturday, March 28, at Mayfair Church of Christ, 2501 NW 50th, Oklahoma City, OK with Darrel Rickard officiating. Interment will follow at 4pm at the Good Hope Cemetery in Helena, OK. Ruth Ann was born at the Hardy Sanitarium in Ardmore, OK on October 1, 1942, the third child of T.A. and Birdie Frances Butcher McCollum. She died Friday, March 20, 2009 at her Moore residence. She was preceded in death by her parents and older sister, Marilyn Frances McCollum Shannon.
She graduated from Ardmore High School in 1960 and attended Oklahoma Christian College (now Oklahoma Christian University) for one year. Ruth Ann started her working career with Peoples Federal Savings and Loan in Ardmore, OK. She worked for Peoples for 27 years, and then worked for Red River Savings and Loan in Lawton, OK for 4 years. She moved to Oklahoma City to complete her banking career of 46 years with positions at Local Federal Savings and Loan, Local Oklahoma Bank and Coppermark Bank until her retirement in 2007.
Ruth Ann leaves a brother, Charles, and his wife, Ann, of Richardson, Texas. She leaves three nephews, Alan of Austin, TX and Tom of Dallas, TX and Richard Shannon, Moore, OK. She also leaves three nieces, Susan of Plano, TX, Deborah Shannon Powell of Norman, OK and Beverly Shannon of Stillwater, OK. Ruth Ann also leaves a large extended family in Oregon.
One of her favorite activities was visiting with her many friends that she had acquired over the years. That was best accomplished with her work on the Ardmore High School 1960 Reunions over the years.
In lieu of flowers, please send donations in Ruth Ann&#39;s name to Mayfair Church of Christ or your favorite charity. Viewing will be Thursday and Friday. Services will be handled by Buchanan Funeral Service, 8712 N Council Road, Oklahoma City, Oklahoma, (405) 722-5262. www.buchananfuneralservice.com