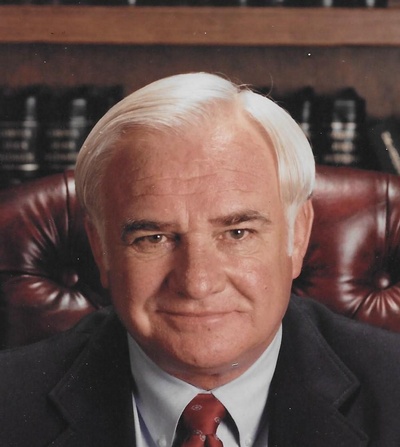 Ted passed away peacefully on Christmas Day. He was born in Chickasha, OK to Ray and Helen Bell.  He was a member of the Class of 1950 at Classen High School.  Ted defended our freedom as a U.S. Marine during the Korean War. Ted served our country bravely in the Battle of Inchon an amphibious invasion that led to the recapture of the South Korean capital of Seoul.

In 1954, he married Jeanette Naberhaus.  They were married 44 years until her death in 1998.   Ted was a devoted father and husband.  He enjoyed spending time with his family and friends.  He had a very outstanding career in sales serving 38 years with Bolen Oldsmobile.   He was a multiple Oldsmobile Vanguard winner, a prestigious award for consistent yearly top sales achievement and service.

Ted and Jeanette were Charter Members of St. Charles Borromeo Catholic Church.   Their lives were devoted to raising their children.   Ted loved people and was an eternal optimist.  Throughout his life he always maintained a positive attitude and impressed work ethic and integrity upon his children.

Visitation will be from 1-8 PM on Friday, December 29, 2017 at Buchanan Funeral Service with family to greet guests from 6-8 PM. A Mass of Christian Burial will be held at 11:00 A.M. Saturday, December 30, 2017 at the St Charles Borromeo Catholic Church, 5024 N Grove, Oklahoma City, OK with internment to follow at 2:00 PM at Holy Trinity Cemetery in Okarche, OK.