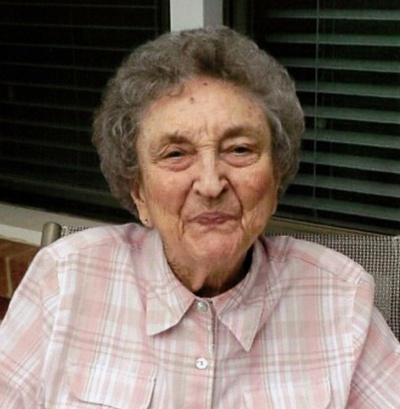 Verda Mae Newman passed away Wednesday, August 9, 2017 peacefully in her sleep at home.

Verda Mae was born May 21, 1927 to Alex Culkirk Smith and Emma Frances (Ellis) Smith. She was the youngest of 9 children. Verda Mae attended the 2 room Bell View School and later the Gyp Hill Elementary School after the family moved. She graduated from Weatherford High School. It was during her school years that she met her future husband, Donald Clyde Newman. They were married on September 7, 1946, becoming almost inseparable for over 70 years.

Verda Mae worked briefly at TG&Y before joining Southwestern Bell Telephone Company in 1946. She had a 36-year career as a long-distance operator, retiring July 10, 1982. Early in her career with Southwestern Bell, Verda Mae and Donald welcomed a daughter, Debera Newman, to their family in 1948. They moved from Clinton to Norman, Oklahoma in 1967 where they lived for 3 years before moving on to Oklahoma City and then to their current home in Bethany, Oklahoma.

Verda Mae and Donald shared many interests. They loved to travel and they shared several of those trips with their grandkids, Cindy and Chad.  Trips to Colorado were among her favorite trips. They would take evening drives through the beautiful countryside and count deer with grandkids as they went. They took many trips, mostly to the western United States including Alaska, and also to Canada. They also traveled to Yuma, Arizona in later years to enjoy the warmer winters and long-time friends who also found their way there.

Verda Mae liked to garden.  She canned many pints of vegetables she and Donald had grown and shared them with their family. She also enjoyed taking walks in Woodlawn Park.

Verda Mae was preceded in death by her parents, and her 8 siblings: Zora, Cora, Iva, Charlie, Mary Alice, Doris, Theron, and Ivan; and a nephew Dale Taylor.

Verda Mae is survived by her husband of over 70 years, Donald Newman and daughter, Debera Newman of the home; grandchildren Cindy Crowl of Oklahoma City, and Chad Crowl of Enid; great-grandchildren Bryce and Chloe Crowl; a large number of nieces and nephews; as well as extended family Kenneth Crowl, Amy Kelley, Holly Shearon, and Jordan Ashby.

The family would like to thank Verda Mae’s caregivers, Josie Cruz, Judy Smith and Integris Hospice nursing staff, particularly Stacey Mabus, RN, for her extraordinary care during this journey. They would also like to thank all those who have kept Verda Mae and the family in their thoughts and prayers.