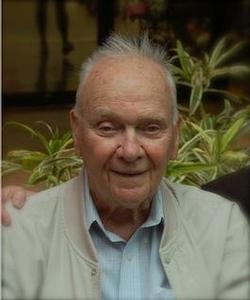 He was born March 18, 1919 in Lilesville, NC; the third son of Fred Hargrave Wall and Hattie Ritchie Wall. Walter Ashe grew up and attended High School in Siler City, NC. He graduated from UNC in the class of 1940, where he was elected to Phi Beta Kappa and Beta Gamma Sigma honorary fraternities.

He was the last of three brothers drafted as citizen soldiers in WWII.

They were discharged after the war from the Air Force, the Field Artillery, and the Medical Corps as two Captains and one Major.

He served in World War II in the Quartermaster Corp and later in the Army Air Corps where he flew with the 351st Bomb Group, 511 Squadron of the Eighth Air Force. His B17 was shot down August 6, 1944 over Berlin and he was a German POW for nine months.

Walter Ashe was, at various times, a salesman and zone sales manager for Burroughs Corporation; vice president of Municipal Forms and Systems of Durham, North Carolina; plant manager for Wallace Computer Services; (now a part of R. R. Donnelley and Sons) and one of the founders and a director of Major Business Systems Inc., Hillsborough, N C.

In lieu of flowers, memorial contributions may be made to THE HATTIE RITCHIE WALL SCHOLARSHIP FUND at the University of North Carolina, P.O. Box 1080, Chapel Hill, NC 27514, or to a charity of your choice.