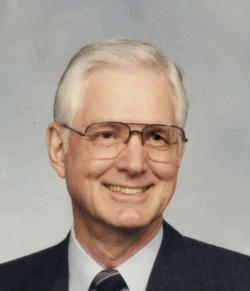 Herb was our husband, father, brother, uncle and friend. He was welcomed into heaven by his Lord and Savior, Jesus Christ on August 16, 2014. William Herbert Rodden, age 83, passed into heaven after months on home hospice and a 9 year battle with cancer.

Born September 27, 1930, in Hobart, Oklahoma to Clarence Ivan and Faye Maye Hathcox Rodden, Herb attended Little Hope and Rocky schools. He was born again at the age of 9 during a revival led by Tom Bolton. Herb served in the US Navy in Guam and Japan until 1954 attaining the rank of Petty Officer 2nd Class. On March 29, 1956, he married Hanna LaRue Slaten in Shawnee, Oklahoma. He graduated from Oklahoma A & M (OSU) in 1958 with a degree in Electrical Engineering, and was a member of Eta Kappa Nu.

Herb's career began at Texas Instruments in Dallas and completed in Colorado Springs. His work often required perseverance to find solutions for various radar development programs, ensuring that the contract would be fulfilled with both stateside companies as well as governments in Europe. His detailed notes and study skills also served him well as a Precept Bible study leader. He was a faithful prayer warrior for many years, and found encouragement through Southern Gospel music. He often sat at the piano and enjoyed playing through the hymnal.

During Herb's "retirement," he helped create 7 inductive Bible studies for children with his daughter, and traveled the country to share these studies with home school families for 11 years. He enjoyed being a Master Gardener, working with a variety of flowers and grew a hearty vegetable garden. He was a do-it-yourselfer: remodeling the kitchen, laying tile and flooring and woodworking in his spare time. He enjoyed reading books about history, aircraft, war, people, politics, and places. His quiet demeanor evidenced his confident assurance that God is sovereign, bringing peace in otherwise stressful circumstances. He was a man of integrity with a standard of excellence in all that he did.

Survivors include his wife Hanna, daughters Janice Southerland and Beth Jones, son-in-laws David Southerland and Greg Jones; granddaughters Kellie Vincent (married to Jonathan Vincent), Amy Southerland, and Anna Jones. He is survived by his sisters, Mary Frances Whitehead, Barbara Kasper and Linda Langley (married to Joe Langley), along with several cousins, nieces and nephews. He was preceded in death by his parents, Clarence and Faye Rodden, his sister Betty Whitehead and his brother Gordon Rodden.

Herb's family is so grateful for the care received through the staff at Frontier Hospice.

Memorial contributions may be given to the Wounded Warriors Project.org.