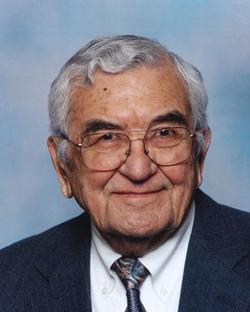 David Merle Landrum left this world for his heavenly home with the Lord on November 19, 2013. He was born April 6, 1927 in Hulbert, OK, to Earnest E. and Sallie (Tucker) Landrum. At the age of 17 he enlisted in the U.S. Navy and proudly served his country during the last 18 months of World War II, seeing action in the Philippines, Borneo, the Celebes Islands and China. Following the war he entered Bacone College in Muskogee, then earned his B.S. degree from Northeastern State University in Tahlequah and a master's degree from Oklahoma A&M. Doctoral work was done at OU. He began his teaching career in 1950 as a high school teacher for one semester at Bruno, AR. That fall he joined the staff of Bacone College where he taught six years, followed by two years at Cameron University. In 1961 he came to Central State University (later UCO) where he taught for 36 years. David served as chairman of the business department at each of these colleges. He was twice chosen by students to receive the Professor of Excellence award and was honored by the UCO faculty as Educator of the Year and again for Outstanding Service to UCO School of Business. He established the annual Career Day at UCO which launched the careers of many students. David loved teaching and thoroughly enjoyed each day of mentoring his students. In 2007, he was inducted into the Bacone College Hall of Fame.
David was preceded in death by his parents, brother Bill, and a baby brother. He is survived by his wife of 31 years, Nancy; son David Jr. and wife Patricia of Norman, OK; daughter Karen Young and husband Brett of Shelley, ID; two stepchildren, Todd Paul and Robin Croninger and husband David of Oklahoma City; and by two sisters, Juanita Smith of Wagoner, OK, and Shirley Knothe of Boerne, TX. Also surviving are three grandchildren: Kyle Young and wife Rosa, Sarah Everett and husband Caleb, and Dennis Landrum. He is also survived by great-grandsons, Jayce and Jesse Young, several nephews and nieces, and by JoAnn Landrum, former wife and mother of his children.
Celebration of Life services will be held at 2:00 pm on Monday, November 25, at United Methodist Church of the Servant, 14343 N. MacArthur.
The family wishes to thank Dr. Adams and the wonderful staff at Norman Veterans Center as well as the chaplain and caregivers at Valir Hospice for the loving care and compassion shown to David, and to Nancy. In lieu of flowers, please consider contributions to the UCO School of Business Scholarship Fund, Bacone College's Scholarship Fund, or to United Methodist Church of the Servant's Care Ministry.