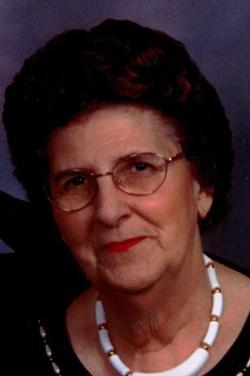 Dorothy Nell Holmes Trepagnier departed this life on February 24, 2014 at the age of 86. Dorothy was born November 3, 1927 in New Orleans, Louisiana, to Flavia (Sause) and Hulette Holmes. She married Harold J. Trepagnier on November 13, 1948 at Our Lady of Lourdes Catholic Church in New Orleans.
Dorothy is preceded in death by her parents and two sisters, Norma Nunnmaker and Helen Gleason. She is survived by her husband of 65 years, Harold Trepagnier, Sr., her children Harold Jr., Dennis (Jackie), Rick (Becki), Jim (Cathie), Lanell Coughran (Lloyd) and Tom (Julie), 12 grandchildren, 7 greatgrandchildren, and one sister, Shirley (George) Doyle.
Dorothy was known for her tender heart especially when it came to children and dogs. She was an accomplished artist, a devoted wife, mother and grandmother, whose wit, wisdom, love and influence will be greatly missed by all who knew her.
Wake will be held at Buchanan Funeral Home on Thursday, February 27, 2014, at 7:00 p.m. Rite of Christian Burial will be celebrated at Epiphany of the Lord Catholic Church on Friday, February 28, 2014, at 10:00 a.m. Burial will be at Resurrection Cemetery. In lieu of flowers the family asks that donations be made to the Oklahoma Medical Research Foundation for Alzheimer's research, Epiphany St. Vincent de Paul, or the charity of your choice.