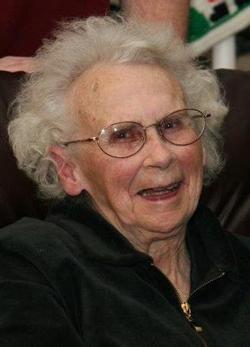 Evelyn Tippett, 91 went peacefully to be with her Lord and Savior on November 21, 2013. She was born in Guthrie, OK on December 6, 1921, the oldest of four children, to John and Corda (Gilbert) Waner. She grew up in Guthrie and upon graduation from Guthrie High School, attended Business College. She was working as a personal secretary in Oklahoma City when she met Floyd S. Tippett and they subsequently married on December 22, 1945. They made their home in Midwest City for over 60 years. She was a stay-at-home mother who was devoted to her four children. She was an excellent cook and gardener. She always had a vegetable garden and with her green thumb made all types of plants thrive. She was also a wonderful caregiver to her mother when she became ill and later to her husband when he suffered from Alzheimer's disease. She was a very active volunteer at the Senior Citizens Center in Midwest City. After Floyd's death in 2004, she moved to Yukon to be closer to her children and she stayed in her home until a couple of years ago when she was no longer able to take care of herself. She was preceded in death by her husband, parents, and her brothers, Gerald and Dale Waner. She leaves behind her children, Floyd Tippett, Jr. (wife Denise) of Oklahoma City; Beverly Lowry of Jenks; Keith Tippett (wife Jerry) of Piedmont; and Steve Tippett (wife Leslie) of Oklahoma City; eight grandchildren and thirteen great grandchildren and another one on the way, and her brother Ferdy Waner(wife Esther) of Guthrie. She will be greatly missed. Visitation will be Monday, November 25 from 9:00AM to 8:00PM with family present from 6:30PM to 7:30PM at Buchanan Funeral Service. Graveside Services will be held at Arlington Memory Gardens, 3400 N. Midwest Blvd., Oklahoma City, OK on Tuesday, November 26 at 1:00 PM.