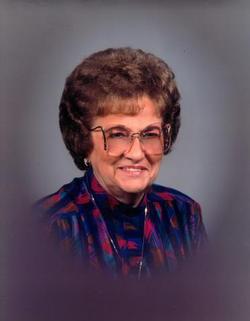 M. Irene Morrison 94, was born to Lillie (Campbell ) and William Carney on October 9, 1919 and passed away on Wednesday, December 4, 2013 in Oklahoma City, OK. Irene grew up in Rudy, AR where she met her future husband Troy Morrison. They were married March 22, 1936. They had one daughter Janna. Irene and Troy moved to Tulsa, OK and she worked for First National Bank, as a teller in installment loans for over 30 years. She was a member of the Red Fork Baptist Church and participated in the choir. She was a lover of her many dogs. She is preceded in death by her husband of 47 years, Troy; her parents; her seven brothers and sisters; her 9 brothers-in-law and 4 sisters-in-law. She is survived by daughter, Janna Meyer and husband Earl, and one grandson Austin Meyer, Also three step grandchildren, Carol (Brad) Snowden, Amy (Chris) Smith, Melissa (Kyle) Sherman; and 4 great grand children, Hannah & Luke Snowden, Logan & Noah Sherman; and her beloved poodle Princess. She will be greatly missed. A visitation with family will be Sunday from 2-4PM at Buchanan Funeral Service in OKC. Another visitation will be in Van Buren, AR on Monday Dec. 9, from 6-8 PM at Ocker Funeral Home. Services to celebrate her life will be 10 AM, Tuesday, December 10, 2013 at Ocker Funeral Chapel and burial will follow at Gracelawn Cemetery.