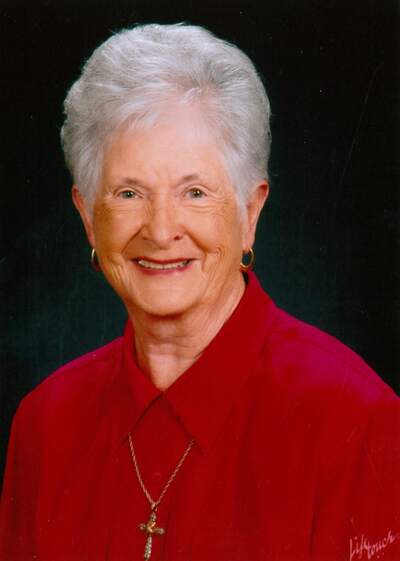 Margaret grew up the second of seven children on the family farm in Kingfisher, OK. She often spoke with pride and joy of her life on the farm. She attended Big Four School where she played basketball with passion. She milked cows twice a day and sold the cream to save money for college. She studied for 2 years at Oklahoma A&M and earned her nursing degree from Kansas University.

In February, 1955, she met the love of her life on a train trip between Kansas City and OKC.  On September 8, 1956 they were married in Kansas City, KS. She worked as a nurse at Saint Luke’s hospital in Kansas City, Missouri for two years. The happy couple moved to OKC in 1962 and found an enduring church home in Messiah Lutheran Church. Following the birth of her first son Jack Jr. in 1958, she put her career on hold to raise her children. They were blessed with the birth of Linda in 1965 and John in 1966.  Margaret worked as a Registered Nurse at Deaconess Hospital from 1972 to 1994 primarily in the surgical recovery room.

The basis for her lasting love of the sport of basketball began at Big Four School where she played, even helping her team win a State Championship.  She cherished her Boston Celtics, Oklahoma State Cowboys, Oklahoma City Thunder, but most of all her beloved Kansas University Jayhawks. Margaret enjoyed RV camping with Jack Sr., growing the loveliest flowers in her garden, spending precious time with family and friends, and traveling with her children and grandchildren. She felt blessed to enjoy a trip to Hawaii with John and Shelle, hiking the mountains of New Mexico with Linda and Mark and the attending the Olympic Swimming Trials of 2016 with Jack and Beth.

Margaret was one of those rare people who never met a stranger, who could strike up a conversation with anyone, anywhere and who cherished every relationship she established. She will be greatly missed by all who knew her and particularly by all who loved her. She will always be remembered for her loving heart and her cheery disposition. She was a dedicated wife, mother, grandmother great-grandmother, and friend to many.

In lieu of flowers, the family requests donations in her memory to the Memorial Fund of Messiah Lutheran Church to be distributed at the wishes of the family.